ArcCorp (Stanton III) is a Super-Earth in the Stanton System owned and terraformed by the ArcCorp corporation. In just 80 years all of the terrain of the planet has been sculpted, zoned, and built upon, leaving very little left for nature.[1][2]

ArcCorp is the single most industrialized world in Human space. It consists of layer after layer of factory; so many that today building additional structures is actually impossible. New facilities are built on top of existing ones. The ArcCorp’s official headquarters is located here, in the massive ArcCorp Tower that rises above all other parts of the factory world.

The bulk of ArcCorp’s facilities are located in Commercial District Circle C. In addition to the tower, ArCorp owns countless corporate towns. There is a cottage industry for tourists, who are invited to take pre-set factory tours. In fact, the actual fusion plants are so dangerous that a sanitized artificial factory complete with holograms and animatronics has been constructed for display to interested Citizens. While it was built for outsiders to make the trek to ArcCorp for the factory tour, it has also become a centerpiece of the local culture.

A line of fusion engine plants ring the planet’s latitudes. The ArcCorp Corporation builds here fusion engines in bulk for hundreds of thousands of civilian spacecraft every year. Traders porting at ArcCorp are advised that in addition to deals on these engines, they can find just about anything else here. ArcCorp are absolutely indiscriminate about who they lease property to, and hundreds of other smaller companies have made their home near the world’s north polar region. Anthropologists familiar with the Xi’An have posited that ArcCorp is the closest human equivalent to a Xi’An factory world, and many predict that our civilization will someday evolve along the same lines.[3]

The world was occupied and claimed by the United Empire of Earth in the 29th century, along with the rest of the Stanton System from the existing inhabitants.

In 2865 it was sold to the company.[2] Unlike other corporate planets, ArcCorp decided to partition off the planet into smaller lots rather than reserve it for future development. Other companies, always non-competitors sprung up rapidly around the globe at a speed never before seen until the orb reached its current state. [4] 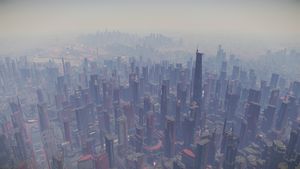 Area18 is one of the main commercial ports for interplanetary traffic for the surrounding region of ArcCorp and the site of ArcCorp Tower. Travellers can find a variety of goods from trusted names as well as local providers, if they're not overwhelmed by the sights and sounds of this landing zone.[5]

The low density of Wala is particularly susceptible to tidal forces which result in the moon being noticeably prolate.

ArcCorp has 5 lagrangian points, which mostly contain planetary debris and asteroids. Some of them also contain a Rest Stop.

According to older lore documents the Stanton system was claimed by the UEE in 2903, and Stanton III was bought by the ArcCorp company in 2920.