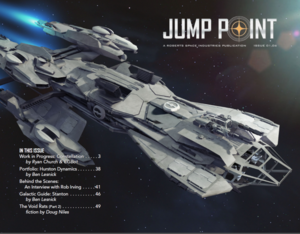 It’s Jump Point day for subscribers! If you’re a development subscriber, the sixth issue of the monthly magazine can now be found in your Subscriber area. This month you’ll learn about the making of the Constellation, visit the Stanton System, learn about weapons maker Hurston Dynamics and thrill at the latest Void Rats installment from Doug Niles. Interested in getting Jump Point each month? Information about becoming a subscriber is

As always, we like to provide everyone with some of the material from a previous Jump Point. This week we’re releasing the Galactic Guide to Earth from Issue #5. Note that the original Shanghai section has been corrected to reflect change to Shanghai… so your Jump Point PDFs are a collector’s edition!

Earth: cradle of Humanity, heart of the Empire, birthplace of mankind... and a difficult place to turn a profit. It’s no secret that Earth is set in its ways. All roads lead to Earth and the system is designed to support native-born Humans above all others. Tax policies support Earth-based corporations at the extreme disadvantage of those based on worlds like Terra, while representation in the UEE Senate continues to skew disproportionately in favor of Earth’s populace. Put simply, Earth is the capital and namesake of the United Empire of Earth and it is the seat of power that governs everything from rising systems like Terra to distant colony worlds that barely impact the homeworlds’ economies. Home to the Imperator and the UEE Senate, Earth sets the standards for everything that happens in the Empire, from moderating economic models, to setting social trends, to organizing military campaigns. While other more strategically located star systems, like Terra, have begun to make claims for higher standing in the Empire, Earth is still the acknowledged center of the universe.

Contrarily, Earth wants for everything. Thousands of years of Human civilization have left many of the planet’s natural resources exhausted and the system imports trillions upon trillions of tons of food, raw metals, manufactured goods and everything else imaginable. If it were not for the so-called “balance tariffs” keeping prices uncompetitive, this would be an ideal situation for any erstwhile shipping magnate. As it is, a run to Earth can barely be guaranteed to provide more than a 5% profit... and that’s before you get to the exorbitant docking and refueling fees for spacecraft carrying other systems’ registration numbers.

Earth is also safe, to an extreme. The UEE military, Advocacy and various police arms patrol the system ceaselessly and they are notoriously uncompromising when it comes to punishing wrongdoers in the system. There is no faster way to get an extremely high bounty on your head than to commit a crime, even a minor infraction, in space near Earth. The military dockyards in Earth orbit are home port to no less than five Bengal-class carriers and at least one is drydocked at any given time.

The planet itself is pockmarked with starports, a natural evolution of nearly a millennium of Human space travel. Three of these have taken the throne as the significant import/export centers of the world: New York in North America, Moscow in Europe and Shanghai in Asia. 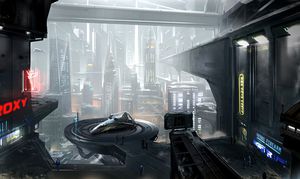 New York is the cultural capital of the UEE, an intergalactic tastemaker and a celebrated blending of both old-style architecture and ultra-modern arcology construction. Most visitors immediately take note of the historical landmarks protected by a thick layer of domed visicrete, allowing such institutions as the Empire State Building and Central Park to continue to exist amidst a modern landscape of massive supertowers. In terms of commodities, selling bulk goods in New York is like trying to get blood from a stone. Nowhere is more protected by UEE law than this city, and anyone but the most desperate traders are advised not to bother. Even black market goods are extremely risky, as it is unquestionably the most well-policed area in known space. However, New Yorkers — even those who have never left the planet — still fancy themselves cosmopolitan men-of-the galaxy. As such, there is an active market for cultural trinkets from distant stars. Trendy New York galleries happily display everything from Hadesian ice shoes to damaged Xi’an engine coils... a vivid example of one man’s trash being another’s treasure.

New York is also home to the famed Roberts Space Industries headquarters complex, featuring a showroom and museum. Many visitors make it a point to pay their respects upon arriving in the port, celebrating RSI’s involvement in introducing mankind to the stars.

Possibly New York’s greatest importance is that it truly is the junction point of the universe in terms of trading. While Earth produces few valuable raw materials in this day and age, almost everything moves through its most significant port on its way somewhere in the UEE. If you’re on the prowl for a particularly rare upgrade or an extremely special commodity, the shopping district surrounding New York’s spaceport is the place to seek it. 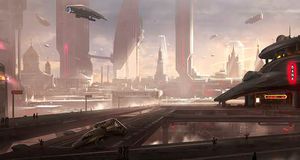 Moscow is a no-nonsense kind of town with more of an urban blue-collar vibe than New York. Moscow is a major distribution center for manufactured goods, in particular jump engines and thrusters produced in the factory complexes that span the Urals. Goods are moved into the city for dispersal to the stars through a system of high-speed transport trains. Down on their luck spacers can always find hard work in the Moscow dockyards, which account for the vast majority of Earth’s export shipping.

Despite this, Moscow is not a manufacturing town and has little need for raw materials (which are sourced elsewhere). The city tends to have a taste for the opulent, and luxury goods sell as well as anything can on Earth. Traders are advised to ship high-end electronics, artwork, high quality foods and various non-offensive black market items to Moscow before trying to turn a profit running guns or metals. 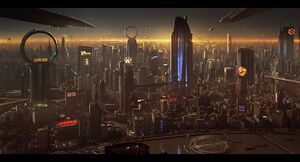 The largest starport in Asia, Shanghai has retained more of a link to the surrounding environment than the vast cityscapes of Moscow or New York. Though still a bustling metropolis, Shanghai is your best chance for seeing a bit of foliage or natural water. Shanghai boasts rail and transit lines stretching to the nearby East China sea, a port region capable of water-docking some larger types of spacecraft. The Aegis China factory produces Idris-class corvettes and puts them through their pre-space trials in the area.

Shanghai has a need for raw materials, especially rarer extragalactic varieties. The less likely a material is to be found on Earth, the more valuable it will be on the commodities market in Shanghai; think Vanduul kan ores, thermacrete, isometal and the like. There is a bustling black market in the city, unlike any found in Earth’s other major ports: if you’re on the hunt for illegal cyborg upgrades, try Shanghai first.

Retrieved from "https://starcitizen.tools/index.php?title=Comm-Link:Galactic_Guide_-_Earth_%26_New_Jump_Point&oldid=130935"
Categories:
Hidden category:
🍪 We use cookies to keep session information and analytics to provide you a better experience.