Today’s Galactic Guide on the Ellis System originally appeared in last month’s issue of Jump Point. You can learn more about subscribing to Jump Point here.

If speed could, paradoxically, be represented by a fixed point in space, then that point is unquestionably the Ellis System. Home of the Murray Cup, the most famous racing event in the galaxy, Ellis is a star system that plays off its reputation to any tourists or other visitors who pass within a light-year of the outer worlds. Despite this, Ellis is actually a very interesting star system on its own merits: from hordes of indigenous life forms that are unlike anything present anywhere else in known space, to an economy based on something other than ship part construction, to the sheer number and variety of planets present in the system, Ellis is worth at least one voyage.

Cosmologically, Ellis is an F3V Yellow star with an especially thick green band, allowing an unusually high amount of human habitation. The system is located in a highly developed region of UEE space with strong jump ties to Nexus and Kilian. Politically, it is a corporate owned star system, although this is more trivia than an actual issue of governance. Despite its association with space racing, Ellis has never been a manufacturing powerhouse; instead, it exports unrefined minerals and seafood to other populated systems in the local star cluster.

Ellis I and II are typical inner-system uninhabitable worlds. Ellis I is a protoplanet that orbits so close to the star that it is frequently caught within solar flares. Miners consider Ellis I the ultimate tease: advanced scanners have revealed that the bubbling magma surface hides a fortune in rare minerals… but there is no shielding technology yet available that would allow a mining crew to access them. Dozens of pilots and crews have been killed in the attempt. Ellis II is shrouded in a thick, smoggy atmosphere. The surface is barren and otherwise uninteresting, although the constant severe storms are an attractive diversion for observers. 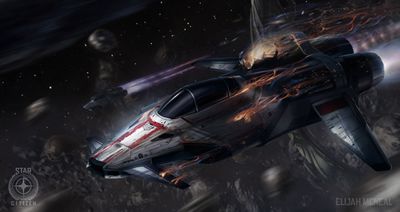 Green, Ellis’ third planet, is the most recent to be terraformed. Located on the edge of the system’s inhabitable green zone (hence the imaginative name), the world was purpose-constructed as a resort world to cater to visitors interested in the Murray Cup. A terraformed ocean world, the planet is dotted with luxury towers and mega-resorts. To preserve the world’s elaborate underwater reefs, only a single landing zone is allowed, in the coastal city of Aydo. Due to the fact that Green was terraformed, it has no native sea life. Attempts to transport species from Kampos and Earth have met with abject failure.

Ellis IV was the first world settled in the system and it remains the most populated planet. It is also the only planet in the Ellis System with an economy that revolves around anything but racing. Kampos is a high-gravity ocean world stocked with all manner of sealife. The planet itself is named after a particularly large sea creature (though not one of the many whose harvested meat is available for export). Kampos’ high gravity also gave rise to the evolution of flatcats, which formed the basis of a brief fad in the UEE core worlds. The world is frequently called Seahorse by the locals, so-named for the appearance of some of the high-gravity sea monsters harvested by native fishermen.

The third of Ellis’ populated planets, Noble (Ellis V) is a mid-sized forest world. The planet is largely unremarkable, with corporate dictates requiring that most of the surface be preserved as-is. A single spaceport near the south polar region allows visitors to explore a beautiful landscape reminiscent of an undeveloped Earth. Two moons make for an especially beautiful landscape at night, although there is a consistent fear that urban development will spread on the world to support the ever increasing number of race fans traveling to the system.

Ellis VI sits just outside the green band, a rocky terrestrial world that is currently being used by the UEE for research into human habitation. The hope is that terraforming techniques will expand to the point that planets farther and farther from a star will be able to someday support a human biosphere. A small science station is in geostationary orbit for this purpose and the population of scientists are always eager to purchase luxury goods to while away the time spent at their thankless tasks. Ellis VII and VIII are similarly uninhabitable worlds. VII features a highly corrosive atmosphere that can be damaging to ships entering local orbit. Ellis VIII is the smallest full world in the system, an uninteresting rock with a limited atmosphere. 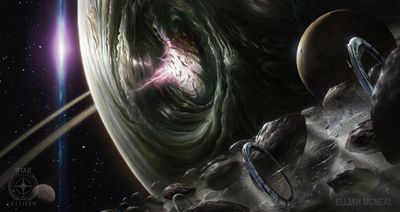 The Ellis system features two gas giants: Ellis IX, aka Walleye, and Ellis X. Walleye is the largest of the two and has been completely commercialized as a fueling world. While Walleye is most famously recognized as a pit stop for racers, most of the time it is the site of impressive queues of freighters and warships waiting to take on fuel. Long-haul transports making the Earth-Pinecone run frequently begin at Walleye, and a variety of ‘rest stop’ facilities have grown up in orbit. Ellis X, Bombora, is a smaller gas giant with an extremely turbulent atmosphere. Scooping fuel can be extremely dangerous, and pilots are advised to avoid any such attempt. On the other hand, it is a chance to skip the wait at Walleye and refuel your ship at no cost!

The eleventh planet in the Ellis system was famously destroyed recently in a collision with its moon. The world was uninhabitable and astrophysicists had long been charging its apparent demise. Nevertheless, the impact resulted in an extremely dense debris field which pilots are advised to avoid at all costs. Outlying regions are a reasonable source for minerals, though, with gravity having already begun the refining process! Ellis XII, named Judecca, is a small frozen ball in space, the site of the occasional ice-mining expedition and little else. The outermost planet in the system, Ellis XIII, is known locally as Pinecone due to its strange shattered rock surface. Pinecone is rich in heavy minerals and is a popular destination for long-haul miners, many of whom transport ores all the way back to Earth itself for resale.

Retrieved from "https://starcitizen.tools/index.php?title=Comm-Link:Galactic_Guide_-_Ellis_System&oldid=161543"
Categories:
Hidden category:
🍪 We use cookies to keep session information and analytics to provide you a better experience.