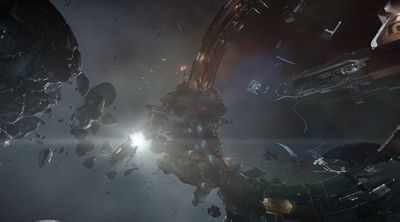 "Together, we will improve and expand mankind ever outwards towards the endless gold horizon."
Ivar Messer, 2546, speech on his ascendancy to Imperator.

Gold Horizon, formerly the Gold Horizon Extrasolar Mineral Prospecting Corporation, remains a strong reminder of both unchecked greed and our civilization’s thriving expansion into the galaxy. The company, named after a line from Messer’s ascendancy speech, in some ways represents the best and worst of the era. It seems ironic to today’s historians that the same Messer government that inspired Gold Horizon’s growth also brought about its end, and that those who ran the company were victims of the same brutality that affected the entire Empire.

Gold Horizon was founded as a dedicated prospecting corporation in the middle of the 26th century, intending to take advantage of the new government’s series of tax breaks for asteroid mining concerns. The company found immediate success, buoyed by the discovery of the Grakneth lode, a high concentration of titanium-bearing asteroids in the outlands of the Terra System. Gold Horizon’s mineral profits quickly lead to its establishment as an industrial concern, producing pre-fabricated mining stations for quick deployment in newly surveyed star systems. At this time in history, interstellar claim jumpers had become ubiquitous, taking advantage of the long lead time between corporate surveys and the actual start of large-scale mining. With Gold Horizon’s prefabs, an entire mining operation — complete with drilling rigs, storage and spatial defense perimeters — could be carried along with survey ships and deployed immediately. The project was another massive success for the company.

By Gold Horizon’s second decade of operation, the United Empire of Earth had become an established reality and Human civilization had caught the terraforming bug. Observing that vast amounts of the Imperial economy were now devoted to supporting general expansion and terraforming projects, Gold Horizon opted to move from mining support into planetary transformation support. The result of this shift is the Gold Horizon Space Station, the distinctive ring-shaped platform deployed around the galaxy to house terraforming workers, their equipment and their support systems.

Unlike Gold Horizon’s mining equipment, the Gold Horizon Station series was massive, with the ability to support hundreds of workers in their difficult task. These starside base camps purported to offer all the comforts of home, from semi-comfortable living quarters to fully equipped medical bays to dedicated entertainment arenas. As large-scale standardized terraforming equipment began to come into existence, it was designed to transit seamlessly through the Gold Horizon station systems that supported the first wave of ‘spit and glue’ biosphere conversions.

With two fingers directly on the pulse of the expanding empire, and a growing number of politicians in their pocket, Gold Horizon seemed to be an unstoppable juggernaut. The company took in billions from government and private contracts (many rumored to have been acquired through bribes). Gold Horizon had its name directly attached to the reigning social movement and seemed as if it could do no wrong. That was until 2650, when CEO and majority shareholder Dennis Acevedo made a single, fateful decision: move the corporation’s headquarters to Terra.

Historians remain divided on the reasoning for Acevedo’s decision. Terra was an increasingly popular center of Human culture, but many in Corsen Messer V’s circle of advisers feared that its popularity was also shifting the cultural focus away from Earth. Whether the company was seeking to reduce its overhead with the relocation or it was actively protesting the increasingly martial focus of the Empire’s expansion is lost to history. Whatever the reasoning, the Imperator took note, and proclaimed Gold Horizon’s move to be a personal affront. Government contracts completely ceased, and private developers were urged not to continue purchasing Gold Horizon equipment. In the space of just five years, Gold Horizon would be driven out of business.

In 2654 the Imperator delivered the coup de grace: the government nationalized all “terraforming support” concerns — that is, Gold Horizon’s space platforms — ostensibly in the name of protecting the citizen settlers who would rely on them while laying claim to the new worlds. Gold Horizon found a significant portion of their assets frozen and the sum total of their long-term business plan completely untenable. Two CEOs, serving in rapid succession, attempted to right the ship with a move back to mining and then general heavy industry support, but nothing could stop the inevitable. Gold Horizon closed shop permanently in 2655.

In one light, the lasting impact of Gold Horizon is the simple fact that in 2944 trillions of Humans live on worlds that were uninhabitable centuries before. Even if mankind was destined to expand to the stars regardless, Gold Horizon’s support backbone was still partly responsible for keeping Human worlds closer to one another than would have otherwise been possible. From that, it is not unreasonable to say that the geographic strength of the Empire today owes something to what the corporation enabled. Still, Gold Horizon’s distinctive ‘G-in-a-bell’ logo remains a divisive symbol in today’s society. As it has long-since entered the public domain, it occasionally reappears as an avant-garde fashion accessory (in the more conservative areas of old Earth, Gold Horizon purses and messenger bags remain big sellers).

History aside, a major lasting impact of Gold Horizon comes from the general indestructability of their stations. Dozens of surviving Gold Horizon stations remain scattered throughout the Empire, mostly in areas of space where terraforming began but was deemed unprofitable midway through the process. The stations have become warrens for illegal activities. Inhabited by loners, survivalists, corsairs and worse, surviving Gold Horizon stations in distant systems can range from black market bonanzas to deadly battlegrounds fought over constantly by competing pirate shock troops.

In 2943, the United Empire of Earth Senate conducted an undercover investigation of the Gold Horizon bases and ultimately determined that it would not be possible to relocate civilians based aboard them. The formal recommendation was that the military pursue a campaign to destroy the remaining bases from space, although these plans have fallen by the wayside in the light of legal issues and the increased Vanduul threat.

Retrieved from "https://starcitizen.tools/index.php?title=Comm-Link:Galactic_Guide_-_Gold_Horizon&oldid=160653"
🍪 We use cookies to keep session information to provide you a better experience.