This Galactic Guide on ORIGIN GmbH first appeared in issue seven of Jump Point, the Star Citizen subscriber magazine. You can learn more about subscribing to Jump Point here. 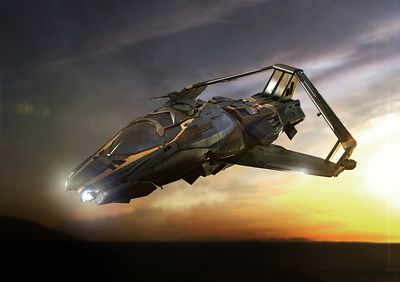 If it is possible for a company to merge class and sophistication with the sheer risk of spaceflight and the cold-blooded nature of interstellar dogfighting, ORIGIN Jumpworks GmbH comes the closest. The company’s extensive array of high-end spacecraft is known for their sleek and sophisticated lines. Similarly, they have cultivated an exclusive customer base from the rich and the powerful. As ORIGIN’s perfectly-manicured salesmen eagerly point out, selecting an ORIGIN design doesn’t just mean buying a ship… it means choosing a lifestyle.

ORIGIN was incorporated during the so-called Glowing Age, the financial boom of the mid-28th century that followed the antimatter rush. For their first decade, the company produced high quality fusion engines used by the UEE military and mounted on the ostentatious Roberts Space Industries and Aegis Dynamics star yachts available to the public (at least, the well-heeled public) at the time. With the need for personal spacecraft growing exponentially, ORIGIN moved to compete with the companies they initially supplied.

Within ten years, the company was producing a top-five selling midscale composite transport and within fifty their well-paying customer base was neck and neck with RSI for gross profits in the manufactured spacecraft field. ORIGIN premiered their initial 200 and 300 lines of personal ships in 2899 and has held a strong second in that market ever since.

Founded on the banks of the Rhine in Cologne, Germany, ORIGIN had strong ties to Earth for the first two centuries of their existence, originally going so far as to insist that every component for their elite 600 line be manufactured in-Sol. In recent years, these ties have been severed completely.

Declaring Terra the new cultural capital of the UEE, President Jennifer Friskers made the then-unpopular decision to relocate to Terra. In a largely unexpected executive order, she moved corporate headquarters and the primary design team to the settlement of New Austin in 2913. Since that time, manufacturing has become nearly completely outsourced, with only an engine testing facility remaining on Earth’s moon. Government scrutiny of the company since the move has also flourished, with tax issues quadrupling following the decision to leave Earth.

New Austin has since become an “ORIGIN town,” with the company holding fast as the key employer (Omega Foods, the corporate entity responsible for the Crab-O chain, is a distant second). The system has become a mecca for ORIGIN enthusiasts, with wealthy buyers traveling across the galaxy to purchase their ships straight from the factory floor. A stunning company showcase in the center of the city highlights M50s, 300s and 890 JUMPs in a series of life-sized action dioramas costing millions to set up and display, and ORIGIN has sponsored naming rights for local stadiums, high schools and streets. Tourists leaving New Austin without a 300 Series shotglass or keychain is nearly unheard of!

The current workhorse of the company’s lineup (if any ORIGIN craft can be so described) is the ORIGIN 300 Series, a “luxury class” dogfighter. It is to the credit of the company that such a description is not inherently a contradiction in terms: the bare silver metal and the smooth, aerodynamic lines of the 300i base design perfectly evoke both a flowing work of technical art and mankind’s most perfect killing machine. Every element of the 300 Series feels designed, from the recessed missile mounts to the flowing metal gun attachments … and, of course, it was: thousands of hours went into the development of every individual element of their spacecraft. (The company is known to pay millions in bonuses to employees who can figure out how to remove a single bolt attachment from their designs.) 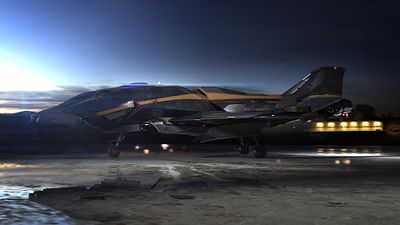 ORIGIN currently manufactures three standard 300 Series models, plus a variety of specialized limited-run variants. The base 300i luxury touring model has remained largely unchanged since the ship’s inception, other than incorporating improved technology and control surfaces. Though the sales copy advertises that the advanced models fit any lifestyle, observers can easily ascribe specific tasks to them: the 315p, featuring long-range options and improved scanners, is the exploration model and the 325a, with heavier weapons and armor, is built for combat. The 300 lineup changes on a nearly yearly basis, with other roles including interdiction, outranging, stealth and blockade running having appeared in the past.

The only standard is the customer: ORIGIN makes a clear point not to associate their craft with piracy. The company spends billions on anti-piracy efforts and has been known to refuse sale to known pirates attempting to purchase their craft in person on Terra. Erstwhile rogues should not fear, though, as the secondary market for 300 Series spacecraft is robust. Nevertheless, the effort has largely paid off: the 300 is known as a law-abiding bounty hunter ship at its roughest and never a smuggler or an aggressor.

The notable “fourth” 300 Series model, not produced in large quantity but arguably the best known beyond the base, is the 350r, the so-called “lightspeeder .” The 350r is the dedicated racer model of the line, used as a base by professional racing teams around the galaxy. 350rs have a storied history, with more Carrington wins than any other spacecraft. From multi-system endurance races to crossstar speed runs, the twin-engined 350r is a common site along the racing lanes. It is also rumored that the UEE military’s elite black watch divisions make use of a squadron of 350rs for covert operations requiring extreme speed; reports of stealth-grey racer-class ships without broadcast transponders operating along the Vanduul border can not be independently substantiated. 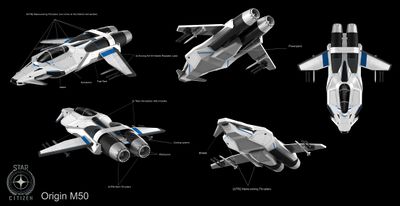 Soon to give the 350r a close second in the acclaimed racer category is the ORIGIN M50, often referred to as a powerplant with a cockpit attached. M50s, which will roll off the production line for the first time this year, represent another leap forward in engine technology and are predicted to give the 350r a run for its money. Despite well (if not overly) publicized teething difficulties in the prototype and Y-series test ships, the current M50 lineup is a solid spacecraft design that promises unequaled speed. Whether the ship will find buyers among ORIGIN’s business-oriented clientele remains to be seen. The company is doing their best to promote the M50 as a ‘second ship’ to 300 owners, the sporty coupe in which you speed around the galaxy on weekends.

Retrieved from "https://starcitizen.tools/index.php?title=Comm-Link:Galactic_Guide_-_ORIGIN&oldid=160658"
Categories:
Hidden category:
🍪 We use cookies to keep session information and analytics to provide you a better experience.