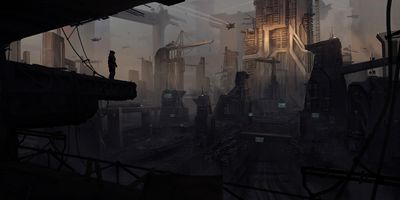 On the surface, Vega is an unassuming four-planet system orbiting a G-type Main Sequence star. Once seen as a potential centerpiece for rapid Human expansion that might someday compete with the likes of Earth and Terra, Vega has suffered as it has found itself on the front lines of the Vanduul conflict.

The system was first settled in 2402. Two planets in the green zone, Aremis and Selene, were quickly terraformed. The system’s population expanded, constructed cities, mined the asteroid field and gained its first UEE representative in rapid succession.

That growth ceased with the fall of Armitage in the late 27th century. Suddenly finding themselves on a front line and fearing an organized, ongoing Vanduul campaign, the system’s population rapidly decreased as those with the means to do so retreated to inner worlds. Real estate prices plummeted to almost nothing, and the tenor of the system’s populace that stayed changed overnight. In the blink of an eye, the most profitable work on Vega became figuring out how to leave it.

The imagined Vanduul invasion has not, as of yet, occurred. Beyond the occasional rapidly defeated reconnaissance foray, the aliens have not made a solid push to take or significantly ravage Vega. Even so, the constant threat of invasion still looms over the populace.

While native Vegans consider themselves to be on the front line of the war effort, few in the military do: with the existing infrastructure and the connection directly to the home worlds, an assignment to Vega feels nothing like being forward deployed elsewhere.

Within the last decade, the system has begun to turn around. People feeling the effects of the difficult economy have begun to flow to Vega to take advantage of the cheap real estate. Even though the early warning systems will occasionally lock the system down as Vanduul Clans are detected roaming through Virgil, clearly that threat doesn’t outweigh the appreciation some have for cheap rent.

Vega I is a dwarf planet located close to the system’s star. No attempt at habitation has ever been made, and no interesting resources have ever been discovered. A single unmanned probe was all it took for astrogeologists to discount the planet as a potential source of commerce or science.

Truly stunning for an inhabited world, Aremis is orbited by a set of planetary rings that contain a number of small shepherd moons. The planet’s biosphere, while adapted for Human comfort in the terraformation process, evolved naturally and gave rise to a significant amount of flora and fauna which still survive.

Aremis was the second planet settled in the Vega system. For most of its ‘life,’ Vega II existed as home for a series of naval and other military bases, as well as a popular location for shore leave. The planet plays host to significant bases for all four services, including one of the oldest Army facilities, Camp [General Chester C.] Manheim. That dynamic has changed in recent years. Aremis has benefited the most from the recent population boom, resulting in several small cities of note and the development of much farmland.

This influx of population has invigorated the system after being named a ‘planet to watch’ by the New United. The city of New Corvo is currently the largest on the world, and is where all off-world commerce occurs; it is becoming quite the center of culinary science within the UEE. Many economists speculate that Vega II will surpass its sister planet, Selene, within a few years, and soon exceed Selene’s stature even back in the height of its expansion. The local Governors Council has also aggressively been pursuing an application for recognition by the Senate. They have even taken steps to procure freelance mercenaries to support and reinforce local police and militia to diminish their crime stats.

Selene is the heart of the Vega system, though many suspect it will not hold that title for long. Although its population is down significantly from the system’s heyday, it still maintains a population an order of magnitude above other border worlds. Selene is properly represented in the UEE Senate, with a seat considered significantly influential.

The largest city and main landout is Titus, a sprawling megalopolis that seems to dream of former glories. While the city center is quite developed, a rusting sprawl of construction projects enacted but never completed throughout the centuries rings the cityscape. Of late, these have been purchased by outside interests in the hopes of redeveloping the region; the success or failure of that initiative is yet to be determined.

One particular segment of the population is of interest: the descendants of survivors from the Orion system. A bloodthirsty lot with little to their names, the descendants of survivors who fled Orion frequently band together to support harrowing vengeance strikes into Vanduul space. These missions pay little and are extremely dangerous, but are considered particularly satisfying accomplishments for true mercenary dogfighters.

Beyond Selene lies the system’s dense asteroid belt. Officially owned by the UEE government, the belt is not patrolled and has been heavily mined. Independent contractors without mining claims of their own often frequent the region; while it lacks particularly valuable minerals, it is considered something of a training run for aspiring miners. The final world in the system, Vega IV is a standard gas giant. A massive, dense, reddish-brown world, Vega IV will never compete with the likes of Jupiter or Krang for beauty. What it does provide is a reasonable stop-over for those seeking to fuel larger spacecraft. Independently-owned refineries dot the planet’s orbit, and the outer layer of hydrogen is generally pure enough for individual sampling.

Retrieved from "https://starcitizen.tools/index.php?title=Comm-Link:Galactic_Guide_-_Vega_System&oldid=160842"
Categories:
Hidden category:
🍪 We use cookies to keep session information and analytics to provide you a better experience.