A Millennium of Memories: Photos in Flight

The top 500 iconic images from the last thousand years of traveling the stars.

The latest addition to this collection of imagery, this photograph comes with a tragic origin. Alia Shakti boarded the luxury cruiser, Bartholomew, bound for Goss as a present for achieving her Equivalency. After only a few days of travel, the Bartholomew disappeared from local scans. When the wreckage was finally found, there were no survivors. Advocacy analysts were able to extract this image from Alia Shakti’s mobiGlas. It captures the moment before the attack and identified members of the vicious pirate pack Argul Dawn as the culprits who surprised and boarded the ship.

When Advocacy Agents finally tracked down and arrested members of the pack, it was this photo that was used in their trial. The seven captured members were then sentenced to twenty-five years on QuarterDeck, while this picture continues to remind us of the fragility of life and how a journey can quickly turn from exhilaration to terror. 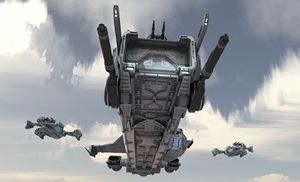 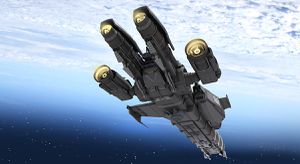 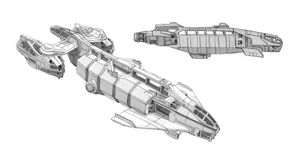 WHAT MAKES THE CATERPILLAR COOL?

The phrase ‘fighting transport’ may seem like a contradiction in terms, but it’s accurate here! The Caterpillar is intended to be the centerpiece of pirate raids in the Star Citizen world. Imagine teaming up with your friends to attack a shipping convoy: a squadron of Cutlasses for cover and interdiction, a Herald for Electronic Warfare duties and a Caterpillar for the dirty work. The Caterpillar is highly modular, and can be configured for a number of different roles… even the command pod detaches for a quick getaway. The ‘Cat is also intended as a platform for boarding operations. Pirates can martial their shock troops aboard the ship and then force their way onto larger targets like frigates and cruisers!

WHERE IS THE CATERPILLAR IN DEVELOPMENT?

The Caterpillar was concepted by Jim Martin, who has also created the MISC Freelancer and the Drake Herald. Jim has created a 3D concept model of the Caterpillar and has done extensive explorations of the interior. He’s even done some special work on cargo loading and landing gear processes! The next step is to bring the Caterpillar into the CryEngine, which we plan to do with or after Arena Commander 2.0. (Since the Caterpillar’s role is more specific than simply being a fighting ship, players will get the most out of it once the persistent universe alpha launches.) Unlike the Starfarer, which is used in the first chapter of Squadron 42, the Caterpillar is scheduled to wait until after the multi-crew ship functionality is perfected.

WHAT INSPIRED THE CATERPILLAR?

Early on in Star Citizen’s campaign, we learned an important lesson: people want to be pirates! This lead to the creation of Drake Interplanetary and the Cutlass… and ultimately the Caterpillar. The ship itself came into being with a simple phrase: “the Starfarer’s evil twin.” (Chris Roberts’ original Wing Commander having set the standard for including both a tanker and a transport.) While we know some will pride themselves for conducting raids with standard civilian equipment, we know that a big part of piracy can be showing off (re: eye patches and parrots.) The name and the ‘industrial’ look of the ship were inspired by modern day construction equipment: with the Caterpillar, we want to create a world where ships are tools rather than just beautiful designs to be placed on pedestals.

Drake maintains that the Caterpillar, a sprawling, modular spacecraft which appears at least somewhat like its namesake, is for legitimate commerce and extended search and rescue missions… but at the end of the day, the Caterpillar is truly the evil twin of the Freelancer. Designed for supporting pirate operations, the Caterpillar features a large cargo hold for carrying loot, heavier armor than other freighters in its class and room for five crew able to serve in boarding operations. Despite its heavier armor, the Caterpillar isn’t a bulldog… a successful operation will require a fighter escort.

Do I need to buy a Caterpillar?

NO! Remember: we are offering these pledge ships to help fund Star Citizen’s development and because of player demand. All of these ships will be available for in-game credits in the final universe, and they are not required to start the game. The design goal is to make additional ships available that give players a different experience rather than a particular advantage when the persistent universe launches. Every sale supports expanding Star Citizen’s overall development, but none are required to gain full enjoyment from the game.