New Babbage is the largest city[1] on planet microTech and a major trading hub, serving as headquarters for software and high-end electronics manufacturer microTech. The landing zone is also a haven for small tech companies. Large public spaces are enclosed under domes to protect the inhabitants against the freezing elements of the planet. [citation needed]

New Babbage's blooming economy has attracted several companies (other than microTech) to house themselves in New Babbage, such as:[2] 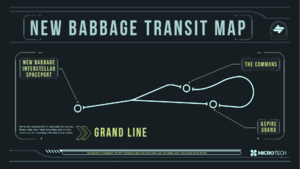 New Babbage has an extensive transit system, connecting the city together. A transit line runs from New Babbage Interstellar Spaceport, over the frozen lake toward the inner city of New Babbage, where it splits for both The Commons and the hub underneath Aspire Grand. Further lines run outwards on spokes from the hub.[3]

New Babbage Interstellar Spacepor sits outside of New Babbage, on the opposite side of the frozen lake. The structure is built into the side of the mountain and supports large volumes of traffic landing and taking off constantly.

Next to the spaceport is a set of garages, where you can go to park or retrieve your vehicle if you desire to travel by ground instead of taking the transit system.[3] 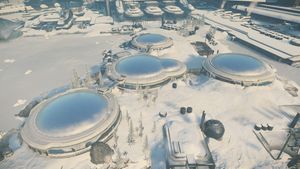 Exterior view of the domes. The Commons ("double bubble") is located at the center, the Promenade is the dome on the right.

The Domes are the main hub inside the city for players to be in. These domes are made up of 3 separate areas.

The Commons is located on the smaller side of the main dome. Unofficially dubbed "double bubble" due to its exterior looking like two merged domes. This area is likened to a "douchey campus", with recreational space.[3] The space is mainly occupied by a large "yoga field", surrounded by several eateries such as:[4]

Between The Commons and the Promenade is a climbing wall, as well as elevators to the surface garage. 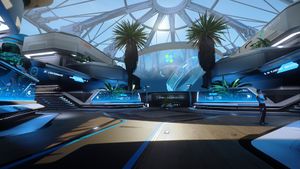 Entrance to the Plaza. MicroTech's Factory Line is visible in the center.

The Plaza is located on the larger part of the "main dome", this area is the corporate business park of New Babbage. This section houses several different shops and offices:[4] 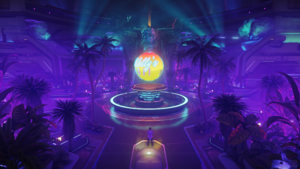 Wally's Bar in the midst of the Promenade.

Promenade is the entertainment area of the domes, where people hang out to have drinks (or consume substances) at Wally's Bar. Eddie Parr is located in this area.[3]

There are also several shops located in this area:[4]

The Expo Center, named after microTech's founder Magnus Tobin, is located near the Domes district and occasionally hosts events such as the Intergalactic Aerospace Expo 2950.

The developers have worked to increase the ability for a player to walk through New Babbage's exterior, without the walled-off confines of Lorville.

The Aspire Grand is the signature skyscraper of New Babbage's skyline and home to Nest Apartments, where Player Habs offer spectacular views of the city and its surrounding environs.[3]

Retrieved from "https://starcitizen.tools/index.php?title=New_Babbage&oldid=193965"
Categories:
Hidden categories:
🍪 We use cookies to keep session information and analytics to provide you a better experience.