From the Star Citizen Wiki, the fidelity™ encyclopedia
(Redirected from Quantum Drive)
Jump to: navigation, search 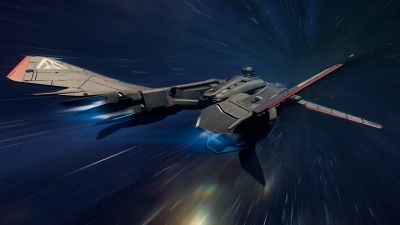 The Quantum Drive is an engine type based on the manipulation of the quantum medium, which allow ships to cross the vast distances of open space in a reasonable time. Currently, ships in quantum can travel at speeds up to 0.2c, or 20% of the speed of light [1], when travelling long distance. Shorter journeys do not approach 0.2c. The speed of travel also varies significantly by the specific quantum drive installed, primarily based on its size. For instance, an S3 Drive (commonly found on capital ships) is capable of aproximately twice the speed of an S1 Drive (commonly found on single seaters).

Long jumps, particularly with smaller quantum drives, can result in overheating causing the ship to fall out of quantum. This can be avoided by either turning off excess power drains such as weaponry, or by overclocking the quantum drive or coolers. There is also a cooldown time after using the drive.

Quantum travel requires spooling of the drive. Spool time varies by anticipated travel distance. The player must also wait for the quantum drive to be calibrated for the selected destination before being able to activate it. Certain actions can prevent another ship from spooling as a means of stopping prey from escaping, such as EMP. Calibration can also sometimes be hindered by an obstruction between the ship and target destination, such as another ship or an asteroid. However this doesn't apply to 'splined' quantum jumps, which curve around the nearby system body.

Interdiction is the act of 'pulling' another ship out of quantum, an ambush tactic used for both tactical engagement and piracy. NPCs are capable of interdicting players, which spawns an asteroid cluster providing a playing field for the ambush to take place on, rather than simply being open space as would almost definitely be the case without this spawning mechanic.

Most quantum drives are capable of being "upgraded" to allow for the usage of Jump points.

Quantum drives are also capable of linking together and performing a group jump. By synchronizing a group of ships, a 'Jump Leader' can select a destination, and after waiting for all of the ships to calibrate, can direct the group of ships to jump automatically to the destination. This simplifies group travel and makes it easier for fleets to coordinate jumps.

Quantum travel requires a target destination, and these come in five forms:

System bodies such as planets, moons and asteroids.

Lagrangians in this context are locations in space relative to a planet where the planet's gravitational effects are nullified. I.E. in real life, an object at this location will remain in place relative to the planet. A planet has five lagrangian points, and in Star Citizen these locations are typically home to Rest Stops.

Planets and moons each typically have six orbital markers in a high orbit far from the atmosphere. OM-3 is above the North Pole and OM-6 is above the South Pole. the other four are equidistant around the equator. OMs can be used to quickly move around the planet so that it does not obscure a destination target, or to reach an unmarked planetside location.

GMs allow quantum travel to the upper atmosphere of planets and moons for speedy access to the surface. These typically correspond to a settlement or landmark on the ground. Dedicated "landing zones" have a unique marker to distinguish them from other less significant landmarks.

This is a deployable satellite that broadcasts a quantum destination marker. They are typically encountered in missions, and can be turned off to prevent others from arriving via quantum travel.

On May 3, 2075, the first self-sustaining quantum drive engine was completed by Dr. Scott Childress along with a team from RSI. It was capable of space travel at 1% of the speed of light. Overnight, the space travel industry was born and spaceflight for civilians became possible[2].