Vanduul ( /væn'duː:l/; kyexiin: äntÙR(Proper); SRX: uantūl (Proper); Vanduul: vanduul; ) are a sentient, nomadic living[Annotation 1] species of bipedal aliens. Males live on ships and form organized groups called "clans" or "hordes".[1] Vanduul made first contact with Humanity in 2681.[2] Since these first encounters, they are usually aggressive towards other races, especially humans. All attempts that Humanity has made to contact them peacefully have failed. After a first big wave of attacks against the human-settled sectors between 2681 and 2712, (the Fall of Caliban, Orion and Virgil) they constantly raided United Empire of Earth's "Western"[3][4] border territories. Their conflict with the UEE in the Tiber System over the following 250 years lead to millions of dead human soldiers and civilians.

The First Contact with Humanity was violent. On 9 August 2681, a group of Vanduul raiders attacked the Dell Township on Armitage in the Orion System, killing 638 people and abducting one human.[11][12][2][13] Unusually, The raiding group looted a lot of worthless items and avoided more important ones. Since these events, Vanduul raided the systems of Orion, Virgil and Tiber System between 2681 and 2712, which lead to a short and rapid growth of Vega,[14] until the system became later itself a target of Vanduul attacks.

On 2 February 2712, a Vanduul clan attacked the Orion System and started the Battle of Orion.[15][16] The decimated UEE Fleet retreated into the Tiber and Caliban System and abandoned Orion as they fled. In the following year, the Vanduul clan, lead by a Kingship, bombarded Orion III, destroying the surface of the planet with Anti-matter bombs and then harvesting the planets of the system. [11][12] 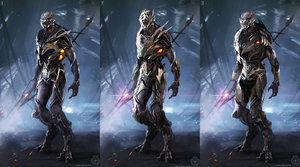 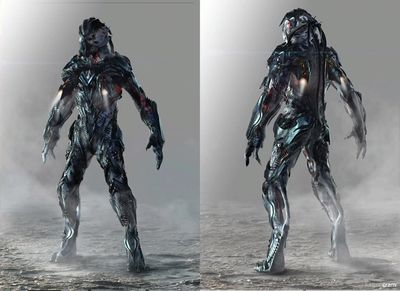 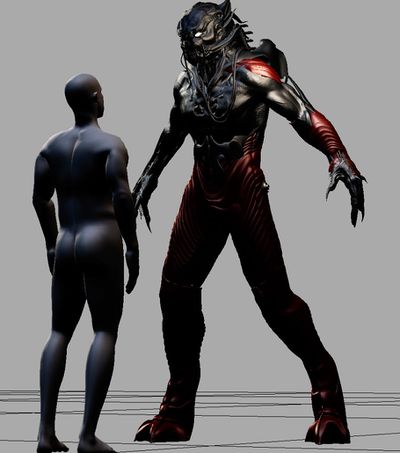 Some of the information on this page is over two years old and may be outdated as a result of the ever-changing nature of a game in development. Newer information should be used where possible.

At least one System deep in vanduul space is claimed by the Banu.[22] The Writers Guide (from 2013) points out that the relations between Vanduul and Banu are 'precarious but friendly'. [23] Some clans are trading with planet-states.[21]

The Writer's Guide claims that there are 'a lot of unfriendly systems between the Vanduul and the Xi’an'. Some clans have trading relations to the Xi’an Empire. It is not a surprise that Xi'an view the Vanduul as barbarians, while Vanduul view Xi’an as 'manipulators and cowards'.[21]

Vanduul youth are educated in the lives of exemplary Vanduul of the past. Specifically the choices they made, and how they overcame their environment and distinguished themselves.[21]

It is possible for an individual human to engage in trade with a Vanduul although it would be incredibly difficult.[21]

Vanduul have a "unified system of quasi-pictographic writing". A translation team from the University of Moscow investigated the Language, although it will take several years before the Vanduul language has been completely deciphered.[1] The language was created by Britton Watkins.[24]

Some words are known, due to a conversion from the performance capture of Squadron 42. According to Sipola (2016),[24] these are (written in the International Phonetic Alphabet)

Andy Serkis has stated that the language is very guttural and harsh sounding.[25]

The Vanduul are intended to be a resemblance of the Vandals and Visigoths [26] [27] [28] - or "barbarian" tribes of the 4th and 5th Century [3] (brutal, purely nomadic, war-like, see Vandalism[29]). In Robert's words "We settled on the decline and fall of the Roman empire. But instead of it being the Roman empire, it's the United Empire of Earth, and we've got surrounding enemy alien factions who are analogous to the fall of the Roman empire." [28] You have war on one side where it’s pretty simple, fighting against the barbarian hordes much like the legions did towards the end of the Roman empire." [3] He also said: "So we start the game before there’s a proper split [between Terra, equivalent of Constantinople [3] and Earth, equivalent of Rome], but there will be a split between the two sides, and then we’ll have an in-game event that’s like the sack of Earth further on, like the sack of Rome." [3] It is a reference to the Visigoths (sacked Rome in 410) and Vandals (sacked rome in 455).[Annotation 2]