From the Star Citizen Wiki, the fidelity™ encyclopedia
(Redirected from Jump point)
Jump to: navigation, search 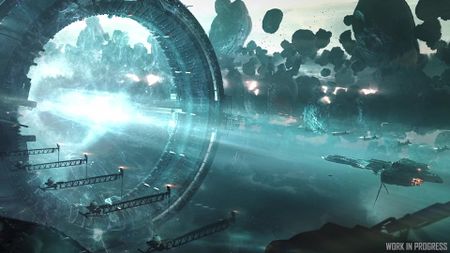 For a list of all jump points, see :Category:Jump Points.

Jump Points ( SRX: uingka’Xa or uingXa (Proper); ) are hyper-stable wormholes that appear between two massive neighbouring gravity wells, such as those of stars, black holes, etc. As wormholes, they allow for near-instantaneous travel between the two linked gravity wells through a higher-dimensional tunnel that links the two entrances. Jump points are a natural phenomenon.[1][2]

Without jump points, inter-system travel would be close to impossible. Even at 0.2c achievable with quantum drives, ships would take decades or more to reach a new star system. There are multiple sizes of jump points; the size of the jump point corresponds with the maximum size of a ship able to travel through it.

Although the two linked gravity wells are the major participants, gravitational interference due to the presence of a fairly massive substellar object, such as a gas giant, can radically alter the equation and thus position the entrance points farther from the star. Star systems without massive gravity wells that could challenge that of the central star(s) are due to allow the formation of far more stable and safer jump points.

The entry/exit points are connected by a four-dimensional tunnel that effectively pierces through regular space-time, called Interspace.[3] Being higher-dimensional, interspace tunnels reduce the distance between the gravity wells by a near-infinite factor, rendering travel times close to zero, but are not completely instantaneous. 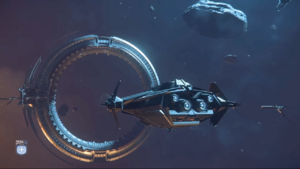 Carrack about to explore a jump point

Travelling through jump points is not completely safe. Attempting a premature exit of the wormhole could dis-aggregate the ship immediately. Jump points are also subject to gravitational currents that push the foreign matter towards the exit. However, interspace is not completely empty, and collision with certain macromolecular particles could devastate the ship's shields and result in the immediate death of the crew.

A successful voyage through a jump point requires the traveller to surf along the ripples of the interspace tunnel without colliding with the tunnel's walls. Already known jump points have been mapped and can be navigated by the ship's autopilot.