The Mechanics of Star Citizen define the capabilities of the game and the players within. Defined in many of the Comm-Links, they serve as the primary gameplay of both Star Citizen and Squadron 42; though some mechanics may not be present in both games. The behavior of these mechanics is managed in the extensive Game Options.

Character mechanics are the mechanics supporting the development, activities, and eventual dies, depending of each player character in Star Citizen.

Each character begins with character creation, develops their reputation through their actions, and eventually dies, after which they will be regenerated and given another chance at life. Once they have died enough times and their ability to regenerate is lost, they grant their property and a portion of their reputation to the next character to take their place.[1]

Ship mechanics are the systems and controls that allow players to build, utilise, and work with the various Ships in Star Citizen. Characters can purchase new ships from a ship manufacturer or used ones from other players before outfitting them with new components. After purchasing protective insurance, players can use their ships in a variety of roles, often called Careers. 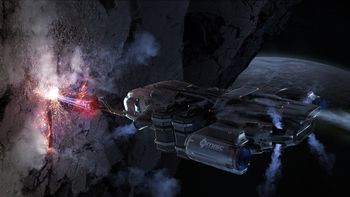 Careers are the jobs, whether legal or illegal, that allow players the ability to earn UEC and other currencies in Star Citizen. There are currently six career groups, each of which has their own roles or profession that allows players to focus and work on. These career groups are Military, Transport, Exploration, Industrial, Support, and Competition. Below are the individual professions players can take:

Note: There are far more ways to earn money than are listed here when including unofficial transactions between players or organizations. As such, these are the "official" careers that are supported by ship designs, Comm-links, and documentation

Missions are pre-set or dynamic quests that one or several players may embark upon. They may come up against NPCs or fellow players in order to complete the objectives. Different missions are available at different times and with varying requirements. They generally offer a reward in UEC.

Planetside is a term used to describe the mechanics and systems around landing on planetary and celestial bodies and interacting with the environment. Players may land on any ship in their current star system with many ships, though some more populated planets will have designated landing zones.

Currently, players can explore ArcCorp as part of the social module released for the Star Citizen Alpha. Here, players can interact with each with using chat, emotes, and other actions. The Social Module is designed to be the foundation of future additions to the Persistent Universe.[2] 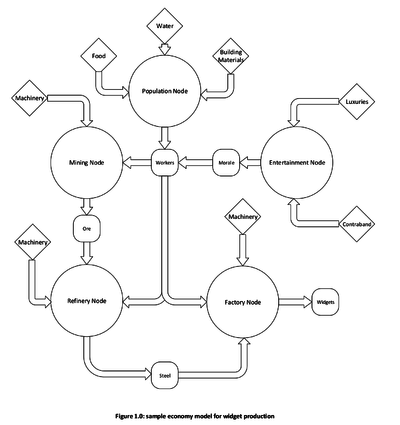 For more about the Trading career, see Careers § Trading.

The economy is the movement of goods and currency throughout the system; facilitated by both players and NPCs alike. From raw materials to finished goods, players may step in at any time to set up their own business or trade.

The basic economy functions like a supply chain: Miners and other resource gatherers work to extract basic resources from the available supply, traders collect those goods and deliver them to other places, escorts protect those convoys from harm (while pirates attempt the opposite), refineries turn the raw goods into processed goods, and factories collect these processed goods to build the finished products that are in demand on worlds throughout the Star Citizen universe. At all points, an organic system keeps track of supply and demand to determine prices and wages for certain actions.[3]

Retrieved from "https://starcitizen.tools/index.php?title=Gameplay_Mechanics&oldid=200033"
🍪 We use cookies to keep session information to provide you a better experience.