Hello and welcome to another installment of LORE BUILDER, where we take a weekly dip into the pool of unexplored Star Citizen lore. If this is your first time, please consult the caveats and background reading at the beginning of the first issue, so you get an idea of what’s already been established.

Thanks again for the additional pirates/criminals/syndicates; they have been absorbed into the Excel sheet.

Let’s get right to it.

The results are in from last week’s poll. The combination of Australian Rules Football and Zan’s proposal was selected as the basis for the rules for Sataball. Thanks to Krant and everyone else who submitted rule systems over the weeks. We will now begin constructing an understanding of the game itself using these two approaches as a foundation.

First, a few weeks ago you decided on Sam Corwin’s origin story for Sataball. He was kind enough to update that origin to incorporate the new rules format:

Created during the later years of colonization efforts by Humanity (close to the Messer era), colonist children found themselves with little to do while schools and the like were being constructed. As a prank, they began playing with the settings on the prefab colony building’s bug-stopper forcefields, the most common model being the SATA-IM, an acronym standing for Static Advanced Termination Arrester – Insect Model. They tweaked the SATA fields to be strong enough to knock cups and books out of people’s hands as they passed through. One day a ball was accidentally kicked towards a door, and the modified SATA field bounced the ball back to the child.

In short order, a few buildings were found with missing SATA fields. The parents discovered the children playing a new game out in an empty lot, and as it kept them out of trouble, quickly ordered more of the inexpensive SATA fields for the kids to modify and make more playing fields with.

It didn’t take long for adults to realize how fun the game could be, and visitors to the colonies brought back vids of an exciting new sport being born.

As with most new games, different colonies experimented with different methods of playing Sataball in the early days of its formation, before it was officially recognized as a sport. Through trial and error (not to mention a few mostly hilarious mishaps with the SATA fields), it was found that the addition of magnetic playing equipment enhanced the SATA field’s abilities to interact with both ball and players. The magnetic equipment could easily be made by salvaging electromagnets from broken down colony machines, so it was a natural addition to the fledgling sport.

To make it easier, we’re going to break this into segments for discussion. This week we’ll start looking at FIELD SHAPE, GOAL TYPES and BARRIERS.

In the initial description, I had mentioned an octagon for a field shape, mostly because it felt a little more visually interesting than a rectangle. Here are some explorations of potential field types:

These fields were scaled smaller to account for a more high-intensity game. Teams would presumably be smaller. My only worry is that when we start adding in the barriers, it might be too crowded.

Probably the most important question of any game, how do you score points? 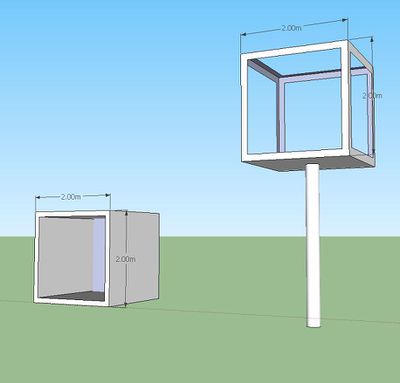 In Zan’s proposal, he described a 2m square for the goal. Teams get one point when the ball is shot between goal line and halfway, two points if the ball is shot from past the half-way line, and three points if the ball ricochets through the square goal from a barrier. I wasn’t sure how the goal would specifically be scored, whether it was a basket or more of a classic goal formation, so I tried couple different explorations of how the goal itself would look.

The other option is the classic shaped goal from soccer (or it could be scaled down to be more like a hockey goal). As with both of those sports, if we use a rectangular goal though, you would assume that the team would have a goalie position, but that’s something that can be discussed in next week’s post.

Zan outlined four types of barriers that can be turned on/off via player action or by pre-programmed routines.

The first question is, what do these barriers look like? Here are a couple of possible options to get you started:

Two Vertical Posts
Two posts with the field acting between them could be interesting to add a physical obstacle for the players to have to dodge, but might be too dangerous and complicated as the posts become an additional barrier on top of the magnetic barrier.

Floor/Ceiling Generators
You could have the magnetic fields be generated by panels in the floor or floor/ceiling in order to keep the playing field clear of physical obstructions.

Second question, is there Color-Coding?

The poles/panels could be outfitted with lights that could indicate active/passive and/or type based on the color of the light used.

Here’s a sample color scheme with the appropriate effect: 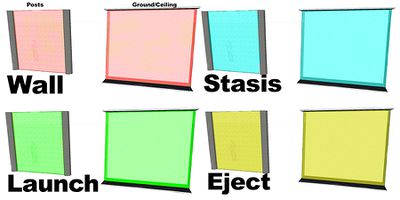 That’s it for this week. Feel free to discuss these elements in the comments below. Next week, we’ll review and see if we’ve circled in on a decision and start to get into the teams, positions, and rules for the standard Sataball match.

Retrieved from "https://starcitizen.tools/index.php?title=Comm-Link:Lore_Builder_-_Eight_-_Field_-_Goals_-_Barriers&oldid=130621"
🍪 We use cookies to keep session information to provide you a better experience.