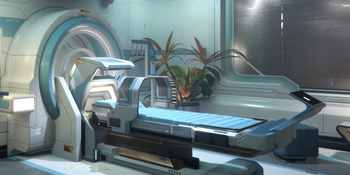 Regeneration is a medical process which enables the total restoration of an individual after death. The process includes getting an imprint created at a local hospital, with repeated regeneration eventually resulting in total death (wiping). [1]

Regeneration is not without danger or limits; grievous injuries sustained prior to death can create Traumatic Response Echoes (TRE). These “echoes” recall vestiges of mortal injury within a person’s Imprint, causing future regenerations to bear the scars of past traumas, regardless of how otherwise healthy a person’s Imprint. Age carries over between regenerations by similar means. Damage accrued after each successful regeneration steadily degrades the integrity of a person’s Imprint, a process measured by their “Imprint Viability Score” (IVS). Once a person’s score drops too low, they are incapable of regenerating and are wiped, suffering true death.

Originally based on technology taken from the Vanduul, the process was further refined by Dr. Aka Ibrahim and BiotiCorp. Regeneration relies on the use of an Ibrahim Sphere — a sophisticated medical tool which stores a comprehensive bioscan or “Imprint” of an individual By combining these two technologies a unique copy of an individual can be constructed after their death – one that is, in nearly all aspects, identical to the source. [1]

Capable of storing virtually every detail of an individual's mind and body, Ibrahim Spheres are at the heart of the Regeneration process. These machines, and the Imprints within, are unique to an individual; only one can store a person’s Imprint at any given time, and attempts to surpass this limitation have always ended in failure. How the Ibrahim Spheres maintain their connection to an individual is not yet known. Scientists have compared the faster-than-light response of an Ibrahim Sphere following an Imprinted person’s death to the instantaneous nature of quantum entanglement.

Imprints can be corrupted by Traumatic Response Echoes, a neurological reaction to traumatic or fatal events. Depending on the severity of the trauma, an echo can “remember” the outcome of a fatal event and leave the regenerated bodies with lasting damage. As an example: someone whose limbs were crushed or outright destroyed before death may lose motor functions in the afflicted appendages even following regeneration – the event was so traumatic that it left an impression strong enough to alter their mind and body.

As an Imprint degrades from repeated traumatic injuries and the resultant echoes, the likelihood of successful Regeneration diminishes. Given the impact echoes can have on an Imprint, it becomes necessary to quantify an Imprint's stability with an Imprint Viability Score. When an IVS becomes too low, Regeneration of an Imprint is rendered impossible and the source individual is wiped, suffering true death.

The viability of an Imprint depends on a number of factors, including but not limited to: the number of and severity of existing TREs; the proximity of their Ibrahim Sphere and available medical services; the quality of the medical scanning technology which regenerates them; and how recently they updated their Imprint. Personal insurance will also play a major role in this determination, as the wealthy will have access to better services — and more life — than the poor. [1]

Regen
A word for someone who has been regenerated. It can also be used as short-hand for the Regeneration process itself.
Cycle
A unit of measurement describing both how many times an individual has been regenerated and the time since their previous Regeneration. For example: someone who was imprinted at age 30 and killed and regenerated at 38 would be on their first cycle. If they were again killed at age 42, their first cycle would have lasted four years and they would now be on their second cycle.
Gap
Similar to a cycle, a gap instead measures the amount of time between the scanning of a person’s most recent Imprint and when that Imprint was used to regenerate someone. Using the previous example: someone imprinted at 30 and killed at 38 would have a gap of eight years. If they were again killed at 42 without re-imprinting themselves, their gap would be twelve years.
Wiped
To be wiped is to experience true death. Though there are several unknown methods of wiping someone by force, the most common way someone is wiped is through a sufficient degradation of their IVS as a result of excessive TREs.

The scientific basis for Regeneration stems from alien biogenetic scanning technology recovered by the United Empire of Earth in 2932. Although liberated from possession of the Vanduul, it is not clear whether the technology is of Vanduul design as it is considered advanced beyond the capabilities of any known sciences, human or otherwise.

Dr. Aka Ibrahim, an accomplished neurologist with experience in restoring brain functions following severe trauma, was tasked by the UEE with studying this alien technology and unlocking its secrets. Ibrahim’s progress was slow in the early years of his research; the recovered technology defied comprehension, the very foundations of its construction seemingly beyond the reach of human science. It wasn't until an unnamed UEE naval operation conducted in 2946 recovered vital Vanduul intelligence relating to the technology’s biogenetic processes that significant strides were made. Armed with newfound insights, Dr. Ibrahim combined his years of research with advanced xenomorphic materials to develop the first Ibrahim Sphere – a device capable of storing an individual's entire physiological and neurological profile down to their memories, personality, and thoughts. These profiles became known as Imprints.

Creation of the Ibrahim Sphere represented only half of the work necessary to fully realize Regeneration. It would not be enough to simply replicate an individual's neurological profile, as one needed to reconstitute the body as well. The solution to this material problem came from the medical manufacturing company BiotiCorp, which developed a progenerate distillate capable of forming the fundamental bodily structures of the human anatomy – cells, tissue, and organs.

The synthesis of Dr. Ibrahim's Sphere and BiotiCorp's Serum facilitated the first successful regeneration of a Human in 2949. Two years later, newly elected Imperator Laylani Addison recognized the vast potential of Regeneration and directed the UEE to publicize the technology. Imperator Addision allocated trillions of credits toward the manufacture and deployment of Regenerative services across Imperial space. Years later, countless lives have been successfully regenerated using medical scanning services provided on even the smallest and most remote space stations.

Regeneration continues to be a controversial topic in the years since its development, spurring theological and conspiratorial resistance to its use and implications. Concerns have been raised about the possibility of UEE manipulation of Ibrahim Spheres to render regenerated persons more docile, or to use the data within the Spheres to create a clone army. To date, no substantive evidence of any such grand conspiracies has been uncovered. [1]

Retrieved from "https://starcitizen.tools/index.php?title=Regeneration&oldid=186120"
Category:
Hidden category:
🍪 We use cookies to keep session information and analytics to provide you a better experience.