2380: Together We Rise. Spectrum Dispatch - Comm-Link

<translate> Humanity seemed to be comfortably rolling towards the future. Planets in the Croshaw System were being terraformed for both habitation and resources. Three new jump-points had been discovered (two in Croshaw, one in our own) so the possibility of expanding into even more systems was becoming a reality.

The heads of governments from around the world gathered for a World Summit to discuss the next phase of global initiatives in space and here on Earth.

Angela Brevot: It’s Week 2 of the World Summit and though there have been whispers that they are getting ready to make a big announcement. No one has been able to wrangle even a hint of what the nature of this announcement is. One analyst speculates that the announcement is probably a publicity ploy to keep the media focused on the Summit in a “desperate attempt to keep it relevant.”

Even so, every day at 6pm CSET, the NewsOrg crews set up in the audience chamber and wait. No indication as to whether there will be an announcement or not. This has been going on for eight days now.

Angela Brevot: About thirty seconds ago, an aide entered the audience chamber and collected the NewsOrg crews. He’s leading us somewhere deeper into the complex. Maybe the announcement isn’t a publicity stunt after all. As you can see, we’re being lead into…

This is the General Assembly. All of the delegates from all the governments in the world are still here. What is going on? </translate> 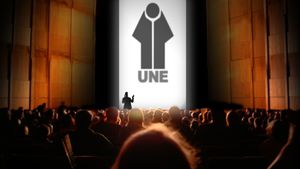 DELEGATE IVAN TSANG IS AT THE PODIUM, FLANKED BY REPRESENTATIVES OF THE GLOBAL SUPERPOWERS

Ivan Tsang: Thank you for your patience. If everyone can please begin transmitting, we will start.

Good evening. It is an exciting time in human history. We stand on the threshold of a new era, where deep space exploration and colonization are not simply a possibility, they are a certainty. Advances in terraform technology and astro-design are letting us travel further and further out into the cosmos. Scientists have discovered a pair of jump-points in the Croshaw system which, once crossed, will open up even more planets and systems for us to explore.

The goal of this Summit was to ask a question. It was not, where do we go from here? It was how do we go from here? Expansion on this level cannot succeed with competing national, political, even commercial interests. Our personal squabbles seem insignificant with the breadth of space open before us.

With that, the representatives of Earth have come together at this Summit. We have debated and discussed but concluded that if we are to set out into space, we must do so as a single, unified race. Therefore, we are announcing the intention to form a single governing body for this and all planets.

The United Nations of Earth.

Each of the government leaders before you will return with a referendum to their respective countries. There is a lot of work ahead. Many issues to address and resolve. We have a long road to building a stable working government of this magnitude. Know this, we will get there. We will be fair. We will be united. Thank you and good night.

Over the next few years, countries debated amongst themselves and argued with each other. Though few admitted, everyone knew that they wouldn’t be able to maintain a consistent expansion into space on their own. It was only after the global superpowers started committing to the UNE that the remainder of the countries started to follow suit.

Humanity still had its differences, but when it came to the universe, now we were united. </translate>

Retrieved from "https://starcitizen.tools/index.php?title=Comm-Link:2380_-_Together_We_Rise&oldid=130324"
🍪 We use cookies to keep session information to provide you a better experience.