When Tumbril Land Systems incorporated on Saisei in 2536, they had a simple business plan; to make tough and dependable exploration vehicles to aid in planetary exploration and surveying. History, however, would quickly change that. The sudden outbreak of the First Tevarin War found the UPE scrambling to equip a military for its first interspecies conflict. Lucky for them, they had an ideal ground vehicle at the ready — Tumbril's first commercial release, the DX20. This all-terrain vehicle proved to be a perfect personnel carrier for the UPE Army and the heavy plating, intended to withstand hostile environments, provided ample protection from Tevarin weaponry. Soon Tumbril began to fulfill more military contracts, but they always maintained their commercial division, creating land-based and HOV classics like the Nova, Timura, and C-series. Although Tumbril's exceptional designs would outlast even the Messers, the company itself began to fall into financial troubles due to unfortunate leadership. In 2862, despite the fact that the military was still using some of their products, Tumbril Land Systems was forced to shut down.[1] 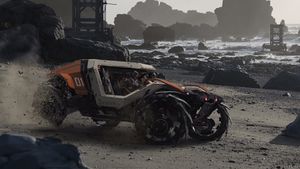 Tumbril's most popular product, the Cyclone

Thanks to a joint financial venture by the DevCo Group and several independent investors, Tumbril Land Systems is back. Working with some of the most exciting minds in vehicular engineering, the resurrected Tumbril is revisiting some of the classic designs and updating them for the 30th century, while remaining committed to continue pushing the envelope with new products, utilizing the same kind of daring thinking and customer-focused experience that made them popular in the first place. "We've got a lot to live up to," said acting CEO Terrence Naban at Tumbril's first board meeting. "Although it's a lofty goal to match the heights achieved by the original company, I believe that by producing the best product we can, we can't go wrong."

Tumbril Land Systems will open a brand new headquarters on Saisei and have secured production facilities in Centauri, Terra, and Ellis systems to produce land-based and HOV vehicles for both the private and military sector. [citation needed]