This article is about the navy branch of the military. For military, see United Empire of Earth Military.

The largest branch and public face of the UEE military, the Navy is responsible for transportation of military resources, maintaining the borders and waging military strikes throughout the UEE. Service members of the Navy are deployed in nearly every system of the empire. In the early days of humanity's expansion into space, the unified Navy primarily served as a police force, patrolling the systems for damaged or broken down ships. Upon the discovery of the Banu, the government realized that the Navy needed to be re-purposed as a military presence. The Navy's fleet began to swell as it was the most obvious visual representation of humanity's military strength.

Structurally, the Imperial Navy is formed around Squadrons which are assigned a carrier and a fluctuating number of support ships. An Admiral is in charge of the carrier and squadron with Wing Commanders running the multiple Wings that operate at any given time.

History of the UEE Navy

Main article: History of the United Empire of Earth Navy

Recruits train in the shadows of the massive shipyards at the academies and boot camps on MacArthur in the Kilian system.[1] The boot camp facilities are called Forges and they put new recruits through a vigorous eight month training program.[2]

Upon completion the recruit enters a phase called the Candidacy. This phase consists of three weeks of testing, designed to not only assess each recruit's physical, psychological and intellectual aptitude, but how well they've incorporated the past eight months of training into action. After Candidacy ends, recruits would be divided and sent to their next phase of training.[2]

Legatus Navium is the most senior ranking official of the UEE Navy. The individual serving in this position is a member of the High Command.

Hear and witness that I do solemnly pledge, mind and body, that I will serve and protect the United Empire of Earth against all who would seek to harm it and its people.

That I will faithfully discharge the duties asked of me and when called upon, I will defend the Empire with my life.

That I will be the sword and the shield. That I will not falter nor fail but fight and win.

That I swear to do all in my power to act as a guardian of freedom and justice, as a champion of honor and valor, and as a true and proud member of the UEE Navy.[3]

Ranks are in order from highest to lowest.[4] These ranks were amended in September 2021; see United Empire of Earth Navy#Development History for details. 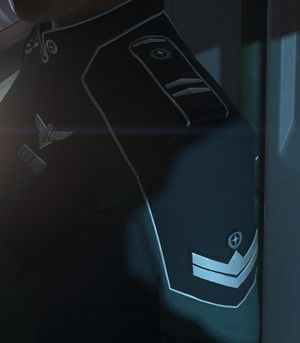 Ranks are in order from highest to lowest.[4]

Your loved one has just taken the first step towards a proud life in Naval service. You may have questions about what they will experience in basic training, the safety of your relative/friend, and what kind of contact you can expect during their training and subsequent deployment.

We know that this can be a scary time for some people and hope that this will offer some piece of mind about the wonderful opportunities that can result from this decision.[5]

What can new recruits expect?

Standard training begins as the recruits arrive on MacArthur via Naval transport. They are immediately given a choice, known as the Rubicon, which is a final opportunity to reconsider the enlistment. After which, the recruits will be divided into groups and assigned to their training camp, known as a Forge. They will also meet their Divisional Officer who will be their first mentor to train them for Naval Service.

After an extended period of intense drilling, physical fitness, and education in military theory and technology, the recruits will transition into the Candidacy phase of their training. During this time, they will undergo a series of physical, psychological, and intellectual tests to determine where in the Navy they would be the best fit for. Some may move to the flight academy, some to research, a few may even be detailed for Marine training.

From this point on, the recruit will receive dedicated training into whatever discipline they've been selected for. This will account for the remainder of their training and will end with their first ship assignment which will coincide with the next Invictus week unless there is a need for more specialized training. After that, they will deploy.[5]

Keeping in touch with recruits

We understand that the first few weeks away from the recruit are the most difficult for family and friends, but we ask that you refrain from attempting to contact them.

To help, all recruits will send a comm to let their family know that they've arrived on MacArthur safely, but as a common practice, we want to keep the recruits focused on these initial phases of their training as they can be crucial in their development. Therefore, we will restrict any inbound communications until after this blackout period ends. After that, you will be able to contact them on a more regular basis as comm access is a weekly privilege.[5]

A Starman's deployment experience will vary based on their ship assignment and specialty. Many of these can take place far away from active combat zones or in dangerous areas of operations but some of these do end up placing them in harm's way. You must understand that all of our service men and women will be trained to endure in these high intensity situations.

The Navy does offer several programs for friends and family who are having difficulty coping with a loved one on deployment, so feel free to contact the outreach department at your local Naval station to speak with a counselor who can walk you through the best options to put you at ease.

While many of our personnel find that the Navy can offer a complete career, some are happy to take their experience and training back into the private sector as a Citizen. You'll be pleased to know that honorable service in the Navy opens a variety of opportunities that may not have been available before such as continuing their education on one of the Empire's many institutions or transforming their newfound skills into a high-paying career in the civilian world.[5]

Regardless of which path they choose, your loved one will be well-equipped to handle all the challenges that life throws at them, knowing that they have loving friends and family like yourselves, and a forever family in the Navy.

"To me, it was never really a choice. I know a lot of people grapple with the decision, but honestly, it never crossed my mind. I mean, both my parents got their Citizenship from military service, so maybe that was a factor. There was a moment though when I touched down on the tarmac, I was suddenly seized with this fear that I wasn't going to be able to be able to make the cut. That was the scariest thing to me; being afraid that I was going to let down my parents and all the people who proudly wore the uniform before me. Thankfully, the Navy isn't about me. My brothers and sisters built me up and made me the starman that I am today."

"Growing up, I never really thought that I would be military. I was a rambunctious kid, to put it mildly. Wasn't great with authority. To be honest, I was on a bad road and by all accounts probably would've stayed on it, until a Judge Advocate set me straight instead of sending me to jail. Once I was in, I managed to find the one thing that had been eluding me all my life: a family."

"I'm sure you're talking to a lot of people who joined up wanting to be Aria Reilly or Cal Mason or something, but me? I wanted to learn. To me, all the wonder of the universe was found in nuts and bolts, in shaving fuel efficiency by three percent. That was my rush. If you want to get your hands on the latest in cutting edge technology and work with some of the greatest minds, the UEE Navy is the place to go."

"I'll just come right out and say it, the second after I signed up, it felt like I got hit by a ship because it was real now. Was I going to have to fight a Vanduul face-to-face? Hell, was I even going to make it through boot? I mean, I struggled to do a pull-up when I was a kid. What the hell was I thinking? Maybe I could try to get out of it. All these thoughts just ambushed me from that moment up to my Invictus. There was this Lieutenant monitoring all the recruits who must've seen how terrified I was. I was fumbling with the seat belt when suddenly the Lieutenant was right in front of me. All he said was "Calm down." I don't know. It was part consolation, mostly order, but whatever magic he used. It worked. I wasn't totally calm when I hit my forge, but I found out everybody was freaking out too. That was our first bond."

The UEEN ranks were amended in September 2021.[6] The ranks of Commodore, Jr. Petty Officer, Starman Recruit were added. The title of Grand Space Marshal was removed as an alternative to Grand Admiral. The rank of Midshipman was removed: this had previously been an officer rank below Ensign.