Kiosks have been placed in the Refining decks that allow players to take their raw mixed mining ore that they mined in their ship and refine it. The player can use these kiosks to create multiple refining jobs which are persistent and complete over a period of time, based on quantity and complexity and create refined ore that is more valuable than unrefined. There are different kinds of refining processes which produce different percentage yields depending on the type of resource being refined. Additionally, different refineries may have different proficiencies. Once one or multiple jobs are completed, the player can collect the refined materials into a ship with cargo capability and sell as a good at a commodity kiosk, with most goods sell-able at major city ports. Now that we have a specific location where refining takes place in the verse, most mineable transactions have been moved there. You can still sell unrefined ore at these locations, or choose to refine them. Levski will also purchase unrefined materials. 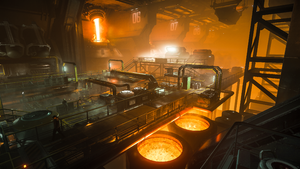 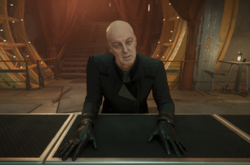 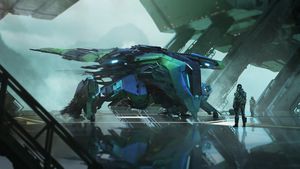 Further improvements to planetary detail and assets which includes a detailed global painting pass with consideration to global climate data and improved cloud layer visuals. We are also refining how object presets are set up, to get a more natural and believable read, as well as introducing some new assets to the biome packs. Updating the remaining geology assets to the organic shader to utilize the latest features. Re-introducing the acidic biome for Hurston and Ariel with PlanetTechv4. Re-introducing the glossy/icy surfaces on Yela and Lyria. We are looking to showcase the above improvements for this release on the planets Hurston & microTech, as well as on the moons Cellin, Daymar, Wala,Yela, and Lyria.

Removal of landing splines at Area 18 Spaceport and Lorville Spaceport and updating restricted flight area around the spaceports.

This update adds a brand-new user interface for all mining-capable vehicles, which will provide the player with a clearer overview of what they are currently experiencing, including: Mining Consumables – What you have equipped, their current state and their duration. Cargo – Your cargo pods now show their contents and update in real-time as you extract materials from mineable deposits. Volatile Cargo – The health and estimated time that the cargo will last in your cargo pods before collapsing, and volatile cargo itself is highlighted in the UI so that you can’t miss it when you collect it. Flight UI – The current flight and gimble settings your ship has active are visible at all times. This new interface is built entirely using the new BuildingBlocks system which will allow for quicker development, iteration and testing of new features for the Mining System.

Balance changes to aspects of mining due to the introduction of the new Refinery System. These changes will increase the potential for finding valuable materials and make mining more profitable at lower ends while providing more high end multiplayer opportunities for multicrew mining ships or the combined power of multiple smaller mining ships. This is an ongoing balancing process that will continue to be tweaked and balanced. Mineables across the entire game have been tweaked to provide a higher maximum percentage of all materials held within them. Some Mineables now have valuable materials in them where they didn’t previously. Some lower-end valued materials now reduce Resistance of the Mineable, meaning that finding some present in a large, valuable deposit could actually be a benefit rather than a hindrance. Resistance and Instability curve scaling has been eased slightly to prevent huge spikes in difficulty in lower-end Mineables. Mining Lasers have been overhauled to bring them in line with the new Mineables but also balance them out and make them all more viable choices. These include widesweeping changes to power outputs, instability, resistance, shatter, charge rates, optimal charge window, and overcharge rates. The amount of consumable slots has been increased for most mining lasers. With the rework to both Mineables and Mining Lasers in mind, Consumables needed to be looked at too to prevent them breaking the entire system. All consumables will now have 5 charges. Consumables have all been rebalanced and include widesweeping changes to durations, instability, charge rates, power level changes, optimal charge windows, and resistance.

Improving wheeled vehicle and aiming gameplay surrounding the Grin Roc and other ground vehicles. Reworked control scheme for wheeled vehicles to include VJoy controls and getting the wheel vehicle and ship controls closer together. If desired, players can go back to the previous behavior by enabling freelook (press z) or, for a more constant solution, remove the mouse bindings from vehicle turn left/right. The ROC mining arm will now follow the VJoy indication in Manual Gimbal Mode (Press "G" to swap). Added the ability to disable the auto-brake state of vehicles which would always activate if no forward / backwards inputs above 10% were added (Press "V" to turn off auto-braking). Added ability to "freeze" the aim vector in manual gimbal mode (RALT+G) in The ROC and all other driver/pilot controlled gimbals (the gimbal freeze will reset once the gimbal mode is changed again). Added more inversion settings for wheeled vehicle controls. The ROC mining arm will now recenter before it is retracted and will no longer be completely offset after getting in and out of the vehicle.

With these improvements to countermeasure gameplay, the amount of deployed countermeasures will play more of an important role in the chance of spoofing missiles. Single countermeasures will be less effective, but players will have the ability to choose how many should be fired with each burst. Different missiles will have varying degrees of countermeasure resilience. Flares have been renamed to Lures and now have different modes to control how multiple launches work including Launch burst (tap H default) or Set and Launch Burst to send out multiple (hold H default). Default Lure burst size is 3 and can Increase the burst amount size (tap Right Alt + H) or Decrease Burst Size (tap Left Alt + H). Countermeasures have also had a sound effects rework.

A rebalance of the Size 9 Torpedoes. They are now much deadlier, with only a few direct hits required to bring down larger ships. This extra damage comes at the cost of speed.

We have made a few additions, updates, and fixes to head tracking devices to help increase usability for players. New Features: Added a recalibration button that resets all head tracking devices internally (except TrackIR, but you can set it to the same button if desired). Added support for positional axes for cockpit and most other ship seats in first person. Added Rotation and position support for external cameras (clamped to 1m in each dimension). Added separate button to enable/disable head tracking on external cameras (unbound by default). Added head rolling for FPS and ADS (including an option to automatically turn it off). Added a smoothing slider and a "forward" center deadzone for Faceware. Added head tracking option to toggle on or off position offsets in cockpits. Added additional head tracking limits for specific seats and beds. Added support for Tobii head/eye trackers ("Tobii 4C" and "Tobii Eye Tracker 5") and added options to set them up. General Fixes: Actor head won't snap from left to right if the head tracking angle is above 180 degrees. All mouse induce head movements will now be suppressed when head tracking is active. Removed the internal offset when the toggle is used (it will be using the internal device offset instead). Reshuffled the menu options for head tracking to make it clearer. Extended the available movement range in seats when headtracking is used. Fixed the auto recalibrate option.

We have made a few changes to how this is handled. We separated target tracking out to a "weak" version and a "strong" version. The weak version is now part of the normal look ahead process and does not produce a very strong movement to slightly help keep the target in view but also keep the HUD and other elements from being lost. The strong version is called "Padlock" now and will follow the target as much as possible. Removed binding to enable look ahead target tracking. Removed option to automatically enable look ahead target tracking. Added binding to enable padlock. Added option to automatically enable padlock (off by default).

We have now hooked up key ordnance on ships (Missiles/Chaffs/Flares) in all Cry Astro/Landing service functionality to run through the shop service, allowing for proper pricing differentials between items when restocking your ships. This will also require some re-balancing for our current insurance and item prices. Overall, this is a major step forward towards getting a fully dynamic set of prices for the landing service functionality. 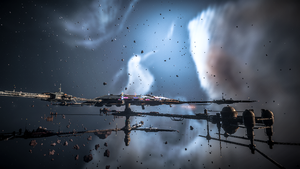 Retrieved from "https://starcitizen.tools/index.php?title=Update:Star_Citizen_Alpha_3.12.0&oldid=188974"
🍪 We use cookies to keep session information to provide you a better experience.