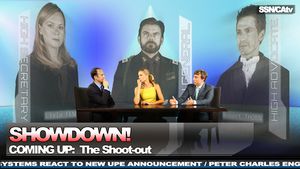 ANNOUNCER: Welcome back to the hottest Current Affairs show on the Spectrum. With our panel, Kyle Black, political analyst, Sheldi Chen, bestseller author and speaker, and Ben Feller, futurist. It’s time for another… SHOWDOWN!

KYLE: So we’re back talking about this new bombshell from the UNE, they are going to restructure to… what is it now? UPE?

SHELDI: What a ridiculous name.

BEN: Come on. It makes perfect sense. We have a couple dozen planets that are approaching Earth-size populations with more on the horizon. These people need to be represented. And seriously, United Nations of Earth is a little outdated.

KYLE: From what we can tell, and they released a fifteen hundred-page dossier outlining the changes so we’re still sifting through the details, but it looks like the set-up is pretty much the same.

BEN: It is. The Congress will now be made up of delegates representing planets rather than the Old outmoded Nations. It’s a better system.

KYLE: What do you think about these new figureheads; a High Secretary who manages infrastructure, a High General for military, and a High Advocate for Law.

BEN: When a government has to manage the sheer number of constituents that-

BEN: Are you serious?

SHELDI: Anytime you focus the power from the many into the hands of a few, someone’s going to learn how to abuse it. And also, how the hell did Robert Thorn make High Advocate? The man is an idiot and should be thrown out of office by a mob not promoted. He’s not even a Citizen.

KYLE: Oh stop, it’s been proven time and time again that he-

SHELDI: I DON’T BUY IT. His file could be doctored. Do you have any idea how easy-

KYLE: Look if it’s that easy to break into FedDataBanks then everybody’s Citizenship standing is suspect. How can I really know that you’re a Citizen?

SHELDI: Hey, I served my time in the AF and did twice the necessary community service to earn my Citizenship. Look it up, you <<INFRACTION>>.

BEN: Right, your parents didn’t contribute at all…

ANNOUNCER: Stick around for more SHOWDOWN! After these local commercials. </translate>

Retrieved from "https://starcitizen.tools/index.php?title=Comm-Link:2523_-_The_Three_Pillars&oldid=130328"
🍪 We use cookies to keep session information to provide you a better experience.