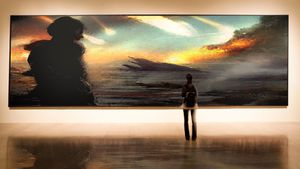 Before you stands as one of the most enduring images from the Second Tevarin War (2603-2610). This piece was inducted into the archive at the UPE Historical Vault for Antiquity in 2633.

The artist, Aaron Fring, was born on Ferron in 2578 to Max and Mary Fring, a teacher and pilot respectively. As a child, he suffered from a bout of Kilos’ Malady and was bed-ridden for over a year. During that time, he passed his time sketching. As a young man, Fring enlisted in the Expeditionary Force as a Field Medic. He travelled to many systems before finally deciding to settle down on Elysium IV.

Operating a small med-station during the day, Fring took up painting again at night. He could often be found wandering the landscape for hours at a time, painting all that he saw. While he showed promise as a landscape artist, he never made much of an impression on the art community. Though he wished for more, Fring was content with his practice and his hobby.

In 2603, a new Tevarin Warlord, Corath'Thal, emerged from the corners of cosmos with a rebuilt Tevarin battle-fleet and launched his first attack against the UPE systems. The Tevarin sole mission was to reclaim Elysium IV, their former homeworld. The settlements on Elysium IV rushed to take up arms in defense of their homes. Fring attempted to re-join but the same Malady that afflicted him as a child resurfaced, preventing him from doing his duty.

On June 24, 2610 SET, Corath’Thal suffered a catastrophic defeat at the hands of Squadron 42 at the infamous Battle of Centauri. With his fleet rapidly falling to either destruction or surrender, Corath’Thal mustered his remaining loyal pilots to make a desperate charge for Elysium IV. Though they suffered an additional 70% casualty, his fleet finally reached the atmosphere of their old homeworld.

Corath’Thal and his pilots lowered their thermal shields and dove for the planet.

Aaron Fring had been walking that evening. His sickness had subsided a bit. He felt he had to get out and clear his head. He wandered the landscape as he had done many times before. On the crest of a hill, he saw something spectacular:

The Tevarin fleet burning up in the atmosphere as they hurtled toward the ground.

"<translate> As with most art, I wasn’t trying to depict the moment exactly as it was. That’s what I’d always done in the past but this was something so much more than the visual. There was so much complexity caught up in that action, from the Tevarin, for what it meant for us as a species, and what it meant to me. I just wanted to try and capture the feeling of that fraction of time. So beautiful and so sad.</translate>"
Aaron Fring

Retrieved from "https://starcitizen.tools/index.php?title=Comm-Link:2610_-_Tears_of_Fire&oldid=148400"
🍪 We use cookies to keep session information to provide you a better experience.