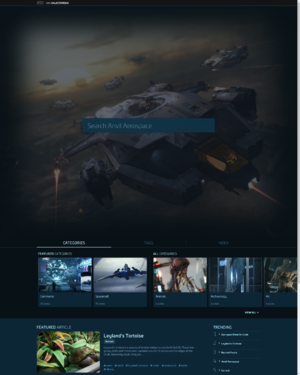 The Galactapedia is a planned in-lore encyclopedia incorporating player involvement that will be utilized in-game in mobiGlas and out of game as a web platform on the RSI site.[1] The Galactapedia should "react" in real-time to events in the Persistent Universe and providing steadily knowledge about the history, factions, corporations and ships. [2][3][4] It is currently live here.

According to the lore, the Galactapedia is hosted by the The Ark in the Tayac System. The Ark collects and analyzes information sent from explorers, researchers, scientists and everyday people to be included in the Galactapedia.[5]

Galactapedia first appeared as a section in the Jump Point magazine after its redesign in 2018.[6] The Galactapedia is launched during CitizenCon 2019 on 2019-11-23 on the RSI site. It is developed from a collaboration with the CIG lore team and Turbulent, with major contribution from Cherie Heiberg and Ben Lesnick.[1]