(Redirected from Avenger)
This category contains pages related to vehicles in the Avenger series. 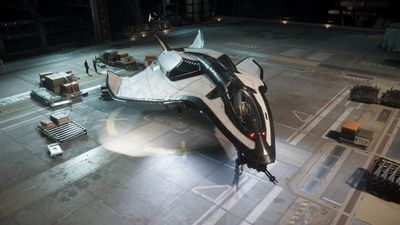 Initially designed as Aegis’ frontline carrier ship for the military, the Avenger series took a different path. Multiple variants ranging in purpose from light cargo hauling to EMP warfare, bounty hunting, and interception exist as of today. All variants offer a well-balanced range of armament and can be used for combat purposes.

The following paints (skins) can be used on all variants of the Avenger.

The Avenger began its life serving dutifully as the premiere front-line carrier plane of the late 28th century. Avengers racked up a number of impressive space-to-space victories in that era, but were ultimately supplanted by more maneuverable designs like the Hornet. With space combat focusing more on skilled maneuvering than pure weapons storage, the Avenger fell out of active duty with the military and was repurposed as the standard ship for Advocacy and local law enforcement. Today, the military will still use Avengers as trainers; the two-seat variant is a forgiving first spacecraft for new pilots.

The current civilian model Avenger is marketed towards bounty hunters, with the second seat removed for direct access to the hold. Munitions storage has also been replaced with traditional cargo hooks, and the standard exterior flight line ladder entry system has been replaced with an internalized solution that allows the pilot to more easily maintain control of access (and egress).[3]

The concept of the ship is designed by Nathan Dearsley (Freelance Concept Artist).[4] In 2017-07, the Avenger series went through a cockpit rework accompanying the Item 2.0 system. Before Item 2.0, players are not able to access the cockpit through the canopy ladder as it is not possible to have multiple actions attached to the pilot seat. With the rework, players can access the pilot seat through both the interior door and the exterior ladder. The rework went live in Star Citizen Alpha 3.0.0.[5] In 2017-12, during the Holiday Special 2017, CIG announced that the Avenger series will undergo another rework to increase its size.[6] In 2018-06-30, with the release of Star Citizen Alpha 3.2.0, the reworked ship became Flight Ready.[7]

The following 5 pages are in this category, out of 5 total.

The following 46 files are in this category, out of 46 total.

Retrieved from "https://starcitizen.tools/index.php?title=Category:Avenger_series&oldid=190507"
Category:
Hidden category:
🍪 We use cookies to keep session information and analytics to provide you a better experience.