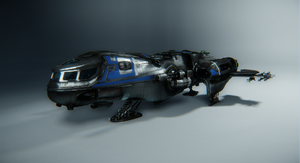 The Musashi Industrial & Starflight Concern (MISC) was formed in 2805 in an arranged business merger between the failing Hato Electronics Corporation and the Musashi Lifestyle Design Unit spinoff of Acorn Limited. The merger made smart use of Hato’s extensive network of large-scale production facilities and Musashi’s reputation for design genius. MISC is based on Saisei in the Centauri System. Corporate offices are located there, as well as an impressive central dealership facility that is fully open to the public. MISC is also known for their especially ergonomic factories, with every spacecraft piece assembled robotically with expert precision. Fully modular, identical production lines have been established on dozens of worlds.

For most of the concern’s history, the majority of business has come from the production output of their heavy industrial division. MISC-HI is responsible for a range of configurable bulk transport spacecraft which are ubiquitous in UEE space. These sturdy, modular hulls are the basis for the majority of human corporate shipping. Their unexpected popularity among the Xi’An has spawned an unlikely business relationship (and a string of imitators on the other side of the border). Four standard hulls are mass produced, ranging in size from the efficient MISC-A to the gargantuan MISC-D.

Wiki Staff Editorial Note: An even bigger Hull E has been announced.

MISC is the only Human spacecraft corporation to sign a lendlease agreement with the Xi’An, agreed to in a closed-door conference in 2910. Although the actual specifics of the deal have remained a tightly-held trade secret, insiders suggest that Xi’An technology has played heavily into Freelancer development, while seemingly Xi’An-produced MISC-D hulls are becoming an increasingly common site at border outposts. Wilder rumors claim that MISC’s next line of spacecraft will begin to incorporate Xi’An thruster technologies adapted for use in their Human craft.

In recent years, MISC has funneled profits from their corporate line into the development of two spacecraft that are nominally marked for personal use, the Freelancer and Starfarer. These spacecraft are aimed to compete in a crowded marketplace against heavyweights like Roberts Space Industries and Drake Interplanetary. Nevertheless, a carefully managed business plan and the one-two punch of a generalized private craft (the Freelancer) and a role-specific niche ship (the Starfarer) have found overwhelming success for the company in this arena. 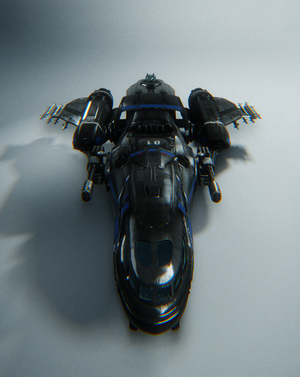 The Freelancer follows the MiSC-HI concept of extreme modularity on a smaller, more distinctive hull. Initially marketed as an efficient long-haul merchant ship for private enterprises, the Freelancer quickly became the ship of choice for dedicated explorers. With the range of a transport plus room to install advanced scanning and jump technology, Freelancers have enabled their captains to chart a number of new jump points in recent years. With a noted engine upgrade capacity and the ability to maneuver better than any other dedicated transport ship, it is no wonder the Freelancer’s roles continue to expand.

It can also be said of the Freelancer that it has inspired more debate than any other spacecraft on the market. Detractors claim the hull is unattractive, that the cockpit’s field of view is unnecessarily limiting and that on paper it is not suited to the roles it has expanded to fill. Freelancer’s supporters, however, are equally dedicated to the ship. They argue vehemently that the ship is the secret of their business success: that rare cost-effective ship that fulfills many of the same roles as the RSI Constellation, but requiring far fewer crew.

In some sense, the Freelancer image has begun to appear at odds with that of MISC itself: dashing space captains charting new frontiers on a wing and a prayer versus heavily organized corporate governance. The truth is, the Freelancer project would not exist without that governance. Every aspect that makes the design popular for independent pilots was carefully researched, analyzed, tested and produced. From the optimal radar package placement to the vacuumform cupholders, the components of the Freelancer went through hundreds of thousands of man hours in an effort to produce a design that comes together seamlessly.

Where the Freelancer was designed to appeal to a wide variety of small scale roles, the Starfarer is a niche spacecraft through and through. As such, it has become the galaxy’s standard fuel transport. Seeking to expand their private spacecraft lineup, a MISC analysis board conducted an 18-month survey of space travel which resulted in a 15,000-page study on ship roles and the current shortcomings faced by space pilots. The end result: a decision to focus development efforts on a dual-role fueling craft, capable of both collecting spaceborne fuel and refueling other spacecraft in-flight. Before the first Starfarer launch, both of these roles were performed by wildly different spacecraft, none of which were intent-designed. Refueling was conducted by bulk transports equipped with massive aftermarket tanks and the process itself had become notoriously dangerous. No ship is more vulnerable than when it is engaging in a refueling operation. (A rule of thumb for pirates states that a ship caught refueling could be captured intact, as no captain would ever risk a firefight breaking out.)

Starfarers carry massive internal fuel tanks that are welded directly to the ship’s core superstructure, making them significantly safer than a modified transport. A system of external probes and dual-pressure access nozzles allows these tanks to be accessed at any time, meaning that a Starfarer can scoop hydrogen from a gas giant as easily as it can offload fuel to a nearby ship. Starfarers can even be upgraded to carry basic refining mechanisms, allowing them to process sufficiently pure fuel themselves without need for a refinery visit. Another common Starfarer upgrade involves modifying the hydrogen tanking system to carry liquid foodstuff. Yet another MISC-designed upgrade package allows for the replacement of the tanking machinery entirely with an alternate cargo chassis that supports bulk goods transport. This has proven fairly unpopular, with bulk shippers preferring a standard hull or a Freelancer.

The Starfarer has also seen unexpected success as a military support ship. MISC has licensed the design to Aegis Dynamics, which produces the Starfarer Gemini (“Star-G”), a heavily-armored tactical variant, under contract for the UEE military.

Retrieved from "https://starcitizen.tools/index.php?title=Comm-Link:Galactic_Guide_-_MISC&oldid=130561"
🍪 We use cookies to keep session information and analytics to provide you a better experience.