The Quantum Drive is an engine type based on the manipulation of the quantum medium, which allow ships to cross the vast distances of open space in a reasonable time.

The Quantum drive creates a bubble around the ship which contracts the space directly in front, while expanding it directly behind, being essentially an Alcubierre drive. The process involves the manipulation of energy density around the ship. Since it is contracting and expanding space around you, your frame of reference stays the same, meaning that anything inside the bubble feels no effect of acceleration.[1]

Quantum fuel (which is refined from quantanium) is the fuel source used to create the required negative energy density around the ship. A large amount of power is required to convert Quantum Matter into a negative energy field. Such a field generates a significant amount of heat. The continued operation of the drive creates more heat than almost all ships have the ability to absorb, but the larger the ship, the greater capacity for both power generation and cooling, so the heat doesn't build up as quickly as it would on a smaller ship.[1]

Larger ship have an advantage since there is more space for power generators and cooling units. The Idris is a good example with its huge reactor room and its cooling bath. It takes longer for a large ship to reach the point where it must shut down to allow it too cool down. This is why larger ships can Quantum travel for a longer duration when compared to a smaller ship that can't dedicate nearly as much space to power generation and cooling. This is also the reason very small ships like a Merlin don't have a Quantum Drive at all: they simply lack the room for the minimum power and cooling needed for a Quantum Drive.[1]

Long jumps, particularly with smaller quantum drives, can result in overheating, causing the ship to fall out of quantum. This can be avoided by either turning off excess power drains, such as weaponry, or by overclocking the quantum drive or coolers. There is also a cooldown time after using the drive.

Quantum travel requires spooling of the drive. Spool time varies by anticipated travel distance. The player must also wait for the quantum drive to be calibrated for the selected destination before being able to activate it. Certain actions can prevent another ship from spooling as a means of stopping prey from escaping, such as EMP. Calibration can also sometimes be hindered by an obstruction between the ship and target destination, such as another ship or an asteroid. However this doesn't apply to 'splined' quantum jumps, which curve around the nearby system body.

Interdiction is the act of 'pulling' another ship out of quantum, an ambush tactic used for both tactical engagement and piracy. NPCs are capable of interdicting players, which spawns an asteroid cluster providing a playing field for the ambush to take place on, rather than simply being open space as would almost definitely be the case without this spawning mechanic.

Quantum drives are capable of being "upgraded" with Jump Drives to allow for the usage of Jump points.

Quantum drives are also capable of linking together and performing a group jump. By synchronizing a group of ships, a 'Jump Leader' can select a destination, and after waiting for all of the ships to calibrate, can direct the group of ships to jump automatically to the destination. This simplifies group travel and makes it easier for fleets to coordinate jumps.

Quantum travel requires a target destination, and these come in five forms:

System bodies such as planets, moons and asteroids. 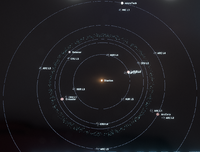 Planets and moons each typically have six orbital markers in a high orbit far from the atmosphere. OM-3 is above the North Pole and OM-6 is above the South Pole. the other four are equidistant around the equator. OMs can be used to quickly move around the planet to reach line-of-sight with a previously obstructed destination target or to get closer to an unmarked planetside location.

GMs allow quantum travel to the upper atmosphere of planets and moons for speedy access to the surface. These typically correspond to a settlement or landmark on the ground. Dedicated "landing zones" have a unique marker to distinguish them from other less significant landmarks.

This is a deployable satellite that broadcasts a quantum destination marker. They are typically encountered in missions and can be turned off to prevent others from arriving via quantum travel.

On May 3, 2075, the first self-sustaining quantum drive engine was completed by Dr. Scott Childress along with a team from RSI. The device was called the Quantum Core Engine. It was capable of space travel at 1% of the speed of light. Overnight, the space travel industry was born and spaceflight for civilians became possible.[3][4]

Retrieved from "https://starcitizen.tools/index.php?title=Quantum_drive&oldid=190554"
Category:
🍪 We use cookies to keep session information and analytics to provide you a better experience.