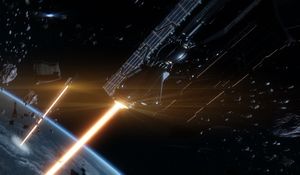 Terraforming is a process to make a planet habitable for humans by converting the atmosphere of a planet to a sustained oxygen environment.[1]

In 2113-04-21, Roberts Space Industries announced the world's first Atmo-Processor (commonly referred as terraformer).[1][2] Since then, it has gone through years of simulation and tests to prepared for the first terraforming effort in mankind history - Mars.[3] 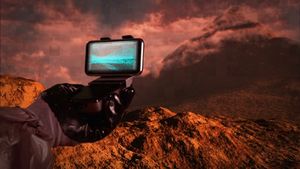 In 2120, after years of simulation and tests, the UNE started to the attempt to terraform Mars. Teams of surveyors were dispatched to Port Renatus to generate topographical maps of the planet surface, to decide Atmo-Processor placement, and test surface samples for possible contaminants to the new oxygen environment. It was the first full planetary exploration of mankind other than Earth.[3][4]

In 2125, Mars was in the final stages of terraforming. An oxygen-sustaining environment had been in place for two weeks. However, tragedy struck when the planet was two days before officially declared secured. A chemical miscalculation in the planetary atmospheric processors made the artifical atmosphere unstable, and led to a planet-wide atmospheric escape. 4,876 scientists and technicians died as the people of Mars had already stopped using breathing apparatuses, the loss happened so fast that "no one was able to sound an alarm or seal the ventilations of the various installations around the planet".[4][5] It is also rumored that the catastrophe might be caused by AI failures.[6]

In 2157, Mars is officially classified as an oxygen-sustaining environment.[7]

Terraforming was hardly regulated in the Messer Era. Performed under inadequate working conditions and organized by several dubious companies, i.e. Gold Horizon. While most terraforming attempts succeeded, some of them irreversible damaged the planet and its inhabitants or left them nearly uninhabitable.

Project Vespa on Tayac I

The goal of the project was to modify the terraforming process as an effective weapon of mass destruction. Test object was Tayac I, which was terraformed and again de-terraformed. The Project started under Ivar Messer I and was abandoned in 2750 without any known progress.

Taranis II was chosen in the 2560s for terraforming by Orphion Inc. albeit being classified as a poor choice. Experimental terraforming platforms were installed and harnessed the energy of its orbiting moon, Taranis 2a. Sub-standard parts and slave-like working conditions created a foreseeable disaster. Taranis 2a mantle cracked and released deadly debris which leaves the planet uninhabitable.

The surface of Uriel froze after a failed terraforming attempt. Settlers introduced the chestnut beetle as a food source in the 27th century with another catastrophic outcome. Every seventy years the aggressive beetles emerge and eat almost everything on the surface. The native population of the the planet lives now in underground warrens.

Failed Terraforming on Castor lead to a 'barely breathable atmosphere'.

The Massacre of Garron II

In 2792, a terraforming corporation began to terraform Garron II, a planet with pre-existing developing life-forms. The Atmo-Processors wiped out much of the planet's indigenous life, including a pre-industrial race. Although the corp denied that the aliens were sentient, footage obtained by environmental activists clearly demonstrated that the aliens were capable of rational thought. A series of protests broke out in UEE systems, and it ultimately overthrew the Messer XI, ending the Messer Era.[8]

In 2795, Fair Chance Act (FCA) is a legislated by the reformed UEE government to prevent similar incidents as Massacre of Garron II happen in the future. The aim of FCA is to protect the lives and well-being of species, who live on planets who have not developed but possess the reasonable capacity for evolution into intelligence, based on the responsibility of human beings for their fellow creatures.[9]

Project Archangel was started under the reign of Corbyn Salehi, in 2872. The building of artificial planets was supposed to replace the need for terraforming.[10] Currently (2950), the first artificial planet, Synthworld is still in construction.

Terraforming candidates in the UEE

The Xyan possessing an unknown advanced Terraforming technology. Yā'mon III and Yā'mon II are currently terraformed by the Empire.

Retrieved from "https://starcitizen.tools/index.php?title=Terraforming&oldid=197883"
🍪 We use cookies to keep session information and analytics to provide you a better experience.