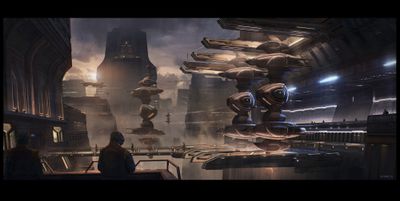 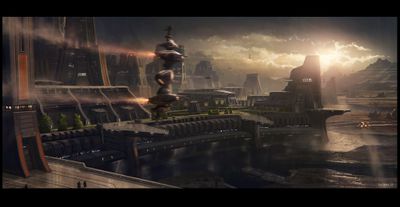 Rihlah, a Xi’An word meaning “source of strength,” is a former military bastion located one jump beyond the Perry Line. The Xi’An establish their solar presences with singular goals, and Rihlah’s initial industrial focus is no exception. With the rise of the Human threat, Rihlah was converted into a major staging area for Xi’An military forces, and the system’s two worlds were initially terraformed with only this purpose in mind. Massive barracks facilities, training yards and munitions plants initially populated the system. If the Xi’An Empire had ever gone into all-out war with Earth, Rihlah would have been a key strategic launch point.

Today, however, Rihlah is a star example of the thawing of relations between the Xi’An and Human Empires. With the increase in trade and other relations between the powers, the ready-made invasion force has been withdrawn and Rihlah has been formally redistricted into its original purpose as an industrial zone. The conversion, and the integration of Humans on the system’s planets, have had an interesting effect and resulted in a particularly unique place for Human visitors to explore (within some very specific limits).

Cosmologically, Rihlah is an A4 main sequence star with a thick green band capable of supporting a pair of large ecosystems. Jump points lead to both Human and Xi’An worlds, although the latter are kept uncharted on all official maps. While the bulk of the fighting force has been withdrawn from Rihlah, a well-trained border defense force remains, making it an inopportune point for smugglers hoping to break into Xi’An space.

The first three planets in the system are largely unremarkable. Rihlah I is a rocky, star-swept protoplanet incapable of supporting any known form of life. Rihlah II is a “puffy planet”: an unusually close-in gas giant with a large radius but a very low density. Due to this and its proximity to the star, Rihlah II is not an effective refueling station. Rihlah III is an Earth-sized world with a rapid daily orbit. With a very thin atmosphere and a surface of dense, jagged rock, Rihlah III is an unlikely candidate for terraformation.

The fourth planet in the Rihlah System, called Shorvu (“sure-vu”) was terraformed by the Xi’An Empire as a barracks world, dotted with facilities to train and house military ground forces as well as mid-range weapons factories capable of equipping them. With the drawdown of the last century, the military factories of Shorvu have been methodically dismantled and replaced with corporate industrial zones (the very sight of which is a fascinating process, as massive Xi’An-driven mechanical ants strip structures and other objects back into their component materials).

Today, the conversion into an industrial world is nearly complete, although there remain scars of the former military occupation everywhere. Xi’An corporations have moved to Shorvu in force. Unlike most (In fact, close to all) Xi’An worlds, Humans are encouraged to visit Shorvu, via a landout in the industrial complex at Yahti, a former troop-training megapolis. This was a calculated decision on the part of the Xi’An governance: corporations needing to interact with Humans are given tax breaks to establish offices in Yahti, keeping Human intrusion into Xi’An space to an absolute minimum. The result is a corporate “office park” with outlets occupied by the big players, from shipbuilders like MISC–Xi’An and Aopoa all the way to food processing companies and simple import/export barristers.

The culture is an interesting mash; many of these outlets hire mostly Human staff, but insist on traditional Xi’An customs and methods of interaction. The industrial regions surrounding Yahti are also largely Human-centric. Any Khartu-al purchased will travel through a line near Yahti, and several MISC-overseen factories pump out Xi’An-acclimatized models of the Hull D. Shorvu also buys outside goods to fuel their industrial development. Heavy metals as well as a variety of electronics are in demand here, and the population has become acclimatized to purchasing these from Human transports where necessary.

Called Xi (“zee”) by the natives, Rihlah V is technically classified as a Xi’An Habitation World. A natural superearth, Xi is a temperate planet roughly 3.5 times the size of mankind’s home world. Like any Xi’An focus planet, Xi’s dedication to a single task has produced ultra-ordered results unlike anything you might find orbiting a Human star. Estimates suggest that between fifty and one hundred billion Xi’An inhabit the stacked lifespheres that form the basis for the world’s dozens of massive cityscapes.

The exception is Corilla, a smaller city surrounded by dense tropical rainforests. Open to outsiders, Corilla has become a de-facto trading post where interested Xi’An can interact with Human, Banu and Tevarin shipmasters. Over the years, Corilla has become home to a distinct community of UEE ex-patriots and political refugees, who have begun to subtly merge their distinct Human culture amidst the city’s standard Xi’An hab-world architecture. UEE law enforcement has no jurisdiction in Xi’An space, and so it has become a popular place to ‘hide in plain sight.’ (However, note that the Xi’An typically do not prosecute Human-on-Human crimes, making it an open port for more ruthless bounty hunters.)

Visitors are warned not to try and explore other regions of the planet, for both sociological and practical reasons. In the case of the former, Xi’An culture remains extremely xenophobic, and Humans are absolutely not welcome in settlements beyond Corilla. Anyone caught in another settlement will be treated as an infiltrator, and the UEE government has shown little interest in expending clout to save the lives of wayward tourists taken in such instances. Additionally, it is generally impossible to simply walk out of Corilla: the settlement’s surrounding rainforests are impassible and are stocked with a variety of toxic plants and deadly animals (chief among them, the fearsome alltongued Rihlah jumpbeast).

From the surface of Rihlah VI, the system’s distant dwarf worldlet, the light from Rihlah’s star is barely visible. This is not, of course, something the typical traveler would ever experience. Rihlah VI is a lonely world void of atmosphere, resources, landing zones or any interest whatsoever. It is wholly un-noteworthy, safe for the persistent spacer rumor that the planet is home to a Xi’An “tripwire” capable of autonomously placing the Empire on a war fitting. The claim, wholly unsubstantiated, goes that the technology is left over from Rihlah’s days as a fortified border system and that the technology remains active, buried in Rihlah VI’s core to this day. No rumor clearly identifies what the tripwire is, with claims ranging from the central computer that controls a massive space network of scanners to some sort of doomsday device capable of destroying the planet and anyone caught investigating it.

Retrieved from "https://starcitizen.tools/index.php?title=Comm-Link:Galactic_Guide_-_Rihlah_System&oldid=162861"
Categories:
Hidden category:
🍪 We use cookies to keep session information and analytics to provide you a better experience.