The Senate of the United Empire of Earth is the legislative organ within of the UEE. The Senate consists of humans and non-human senators. A member of the Senate is called Senator and is a representant of his legislation, which is based on a planet. Only Citizens can be senate candidates and participate in senatorial elections.

It is unknown when the Senate of the UEE was formed. While the UEE was under the influence of the Messer Regime, Senator Terrence Akari negotiated a peace treaty with the Xi'an in 2789. In those times resolutions of the senate were non-binding for the Imperator. The xenophobic opposition of Messer XI against this resolution, his repression and the massacre of Garron II as well as growing resistance ended the Messer Era. The Senate and the Office of the Imperator however survived.

A planet must be reached statehood and recognised by the Imperator to send a senator to the Senate. Senators are elected by the citizens of this planet. Some planets have more than one seat (therefore more than one senator) in the senate.[1]

A Senator is elected for five years (one legislative period) and can serve an unlimited number of terms. Atsuki Evan has served at least six decades (14 or 15 terms, at least 72–75 years) until he retired in 2946.

The Senate acts like a parliament with the senators as legislators. It is passes bills and discusses the budget of the UEE as well as the UEE military and advises the Imperator in questions of foreign policy. Senators are working in several commissions, called Subcommittees.

Chairman of the Senate is the Speaker.

The Senate consist of individual senators, but they are often member of a political party. The three major's are Transitionalists, Centralists and Universalists. It is currently unknown if political parties in the UEE are nominating senators democratically and which influence political parties have.

There is currently not much known about the composition of the senate.

Version, spoken by Edward Aemile after his appointment to serve as Senator pro tempore in 2946:

"I, Edward Javier Aemile, do solemnly vow that I will bear true faith and allegiance to the United Empire of Earth, that I will support and defend the Empire against all enemies, that I will not let injustice stand within the law and use reason and compassion to seek change through the law, that I will use this power granted to me to serve the best interests of all Humanity and that I will well and faithfully discharge the duties of the office on which I am about to enter." 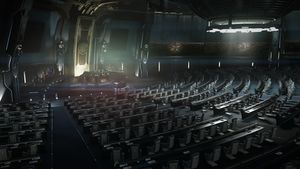 Senate Chamber with podium at the center, the two iconic statues and four of the eight murals on the wall depicting Humanity's virtues

The building that holds the Senate Chamber and the sessions of the current Congress is located in New York, Earth, Sol. The Chamber itself can hold approximately 380 audience members arranged in 6 blocks with 64 seats each and has an additional visitor balcony. The blocks are seperated by aisles that reach out from the central speaker podium "like light rays from a star".[2] The initial design of the chamber is inspired by the Star Citizen logo and the United Nations Great Assembly Hall, the French Senate and US Senate chamber. In order to achieve the look and feel of a building that was built a long time ago, elements from Art Deco and Futuristic Architecture from the 1930s/40s were used together with the slighly outdated look of the UN assemby hall as an example.[3]

The central part of the room is the podium. It is flanked by two statues holding a shield and a sword. From the podium on the right wing 8 mural artworks representing Humanity's journey are displayed along the rotunda, while on the left 8 murals depecting Humanity's virtues and evolution.[3]

The Senate Chamber was first seen in the video of Admiral Bishop's speech after the Attack on Vega II. It will also be featured in the beginning of the singleplayer game Squadron 42.

The Senate is a reference to the Senate of Rome. Council of elders has existed before in the hellenic world (Areopag). It has his origin in the word "senex" (old man; old woman; senate: council of elders) and became an inspiration for many republican states , i.e. the Free City of Hamburg formed his senate in 1216, the US after his successfull revolution in 1789.

This article is a stub.
This article needs some ❤️! You can help the Star Citizen Wiki by expanding it. See Category:Article stubs for other pages that needs exapnsion.
Retrieved from "https://starcitizen.tools/index.php?title=UEE_Senate&oldid=189676"
Categories:
Hidden category:
🍪 We use cookies to keep session information and analytics to provide you a better experience.