If Spider is the face of piracy in the galaxy, Pyro is unquestionably the beating heart. An otherwise desolate, lifeless star system crippled by a flare star, Pyro is most notably the home of the shared pirate outpost of Ruin Station. Like Spider, Pyro is a case of pirates filling (and expanding upon) a void left when the system was abandoned by civilized developers; unlike Spider, Pyro’s station has not settled into an orderly system of black market commerce. Instead, opposing packs constantly struggle for control.

The Pyro System consists of six worlds held hostage by a variable type-M main sequence star with unpredictable solar flares. This flare star has stopped any chance of life developing in the system. Curious astrobiologists even examined the planets in Pyro’s fluctuating green band and have thus far found no evidence of indigenous life forms. It seems that the first signs of life to ever present in the system were brought there through its jump points.

The system was first visited in 2493, forty-four years after the first person suspected something was there. In 2449, the watch officer of the Roustabout, an Earth-flagged tanker ship moving through the Cano system, noted a gravitic anomaly thirty thousand kilometers off the transport’s port bow. A detailed report was sent to the ship’s corporate owners and eventual namesake, Pyrotechnic Amalgamated, but no action was taken. Forty-four years later, when Pyrotechnic was seeking new mining territories, they began reviewing old scan records when it noted the original report from the Roustabout. They dispatched an explorer to the region only to formally discover Pyro and chart its environs. This survey simply noted the overall disarray of the planetary system, the difficulty of finding transportable resources and the unlikelihood of successfully terraforming anything there.

In addition to its development as a center of organized piracy, Pyro is also a household name in the UEE today because it served as inspiration for one of Original Systems’ Arena Commander levels. While the “dying star” moniker given to the level is technically not accurate, the system’s dramatic solar flares are a memorable and ideal location for Arena Commander’s designers to show off how interesting 3D space combat can be!

Pyro I is a charred black rock that is slowly discorporating into Pyro’s star with every subsequent solar flare. The space around Pyro I is difficult to navigate with anything but the highest quality shields, though some industrious outlaws have attempted to utilize the dangerous flares as makeshift reactors for more complicated refining processes.

During the system’s initial discovery, the coreless Pyro II was a major focus. The planet held seemingly significant deposits and a minor “metal rush” saw human trade ships quickly try to harvest what they could. The planet today bears the scars of these quick and dirty mining operations, with a sparse transient population who drift through hoping to find a vein that might have been overlooked during the initial boom.

The surface of this terrestrial world has been reduced to magma thanks to the flares from the system’s star. Some scientists believe the large celestial body that knocked Pyro IV out of its orbit might have also nudged Pyro III closer to the star.

The combination of Pyro IV, a rocky Mercury-like protoplanet, and Pyro V, a massive yellow and green gas giant, is one of the more striking stellar landscapes yet discovered in known space. Arguably a single entity now, Pyro IV and V are the result of a massive meteor strike which altered the orbit of the former into the latter. Pyro V now appears to be subsuming Pyro IV in slow motion, a visual difficult to top anywhere else in the galaxy. 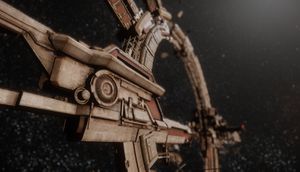 The outermost planet in the Pyro system, this protoplanet is notable mainly for the fact that it is the home of Ruin Station, populated by Pyro’s only permanent inhabitants. Originally built by Pyrotechnic Amalgamated to serve as a hub for their operations in the system, it was only in use by the company for a short time before it was abandoned along with any hopes of earning a profit from the desolate system.

Once the system was generally vacated by corporate, research and mining interests, the dilapidated station quickly fell into use as a meeting place for squatters, runaways and black market deal-making. It was around this time that it earned it moniker Ruin Station as many who traversed its crumbling halls did so with the risk of the station collapsing around them. Yet, despite the dangers, the hideaway’s popularity only grew. It was only a matter of time until it followed the same path as Spider, with outlaws gradually adding to the station’s infrastructure and developing a unique subculture. However, where Spider’s culture centers around honor among thieves, Pyro is based more around whoever has the most guns wins.

Make no mistake: Ruin Station is not suitable for tourism, regular trade or even experienced bounty hunters seeking the thrill of combat. The outlaws that do crew the station are notorious for their use of violence. Recently release Advocacy reports list XenoThreat as the current pack in control of the station, but this may change at a moment’s notice.

A highlight of Pyro’s dimly lit halls is Corner Four, a sequence of former research labs converted into drug factories and no-questions-asked medical treatment facilities. Neutrality, the station’s requisite dive bar, is the only arguably safe place on the station: armoured toughs called the Cousins keep the peace here, at least in so much as they are needed to protect the bar’s staff and facilities.

Any improperly shielded spacecraft will sustain residual damage if Pyro’s star flares during transit through the system.

"If there are any doubts to Humanity’s ability to survive in adverse conditions, one only needs to look at the inhabitants of Pyro to understand that our species adaptability is something quite remarkable."
Conrad Hesler, Struggling to Survive: The Human Story, 2812.05.11

Retrieved from "https://starcitizen.tools/index.php?title=Comm-Link:Galactic_Guide_-_Pyro&oldid=160574"
Categories:
Hidden category:
🍪 We use cookies to keep session information and analytics to provide you a better experience.