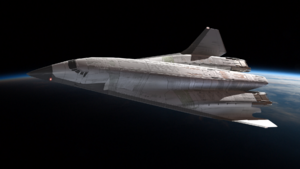 The Zeus was a short-range explorer and the first commercially available spaceship equipped with the Quantum drive. Being built by Roberts Space Industries (RSI) in 2140, it is one of the oldest ships in the Star Citizen Universe. Featuring RSI's patented Q-Core VIII engine, BTST-rated thermal shields, and comfortable cabin for three. It is only mentioned in lore.[1]

In 2075, RSI had created the first Quantum Drive, capable of achieving 1/100th the speed of light, for the military. As time went on, civilians and various industries began petitioning to have the technology made available to the private sector. After Mars Tragedy in 2125, the Zeus prototype is built by the RSI's Astro Development Team to address the terraforming division's efforts to transport resources to Mars.[2] RSI had been listening and worked to streamline the Quantum Drive enough to make it commercially viable. There were concerns however with the potential risk that would be involved with putting such a powerful technology into the hands of non-military trained pilots.[3]

The main issue RSI had with the Zeus during these test flights was its hull integrity. These problems culminated on 2136-6-23 when, during a live flight that was being broadcast across the world, the hull of an early Zeus ship ripped apart as it left Earth's atmosphere, completely destroying the ship and killing the test pilot. The disaster shook people and suddenly the horrifying dangers of space travel transcended the excitement of making it affordable and accessible.

Desperate, RSI turned to the Navy and renowned test pilot Michelle Saleno for help in keeping the Zeus program alive. Saleno had extensive experience with RSI's Quantum Core Engine and held the honor of being the first pilot to quantum past Jupiter. Saleno had been pushing for the training of new test pilots who would be dedicated to cutting-edge spaceships.

Saleno proposed to the Navy to create a squadron that focuses on training of new test pilots who would be dedicated to cutting-edge spaceships. The Navy accepted Saleno's plan and the first incarnation of the 999th Test Squadron was born. After the deal was struck for Navy resources to be used to help RSI develop the commercial ship, Saleno and her crew spent the first year demanding changes before she or any of her pilots would take a first test flight. She battled with RSI executives over the ship's hull and drove RSI to completely overhaul their design. Finally, on 2137-3-19, Saleno climbed inside the Zeus for her first test flight.

At 15:09 SET, Saleno safely touched down. It would require more testing, but thanks to 999's hard work, the release of the first commercial quantum drive enabled ship had become an inevitability.[3]