For a list of all ship components, see Category:Ship Components. 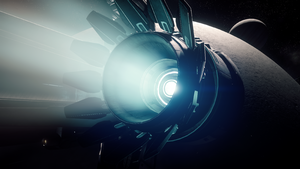 Main Thruster on the Reliant

This article is a stub.
This article needs some ❤️! You can help the Star Citizen Wiki by expanding it. See Category:Article stubs for other pages that needs exapnsion.

Beyond just the hull, the components are all the devices, equipment, and tools that make up the "working" parts of a ship. From weapons to thrusters, each component has different characteristics that differentiate it from other components in that class. Equipment and components can be procured from various stores and shops located throughout the universe such as Hardpoint Guys; supplying weapons from Apocalypse Arms or shield generators from Seal Corporation. These components are then attached to your ship and integrated into the power and CPU systems and activated. Beyond simply purchasing and attaching new equipment, pilots may fine-tune, overclock, and test modifications to the components at the risk of damage or destruction.[1]

While it might be easy to dismiss most components as being less impressive than the more flashy weapons, turrets and missiles, they are no less important to the overall operation of your spacecraft, and found far more commonly across all ships and vehicles in-game.[3]

Tank that stores Hydrogen fuel for the thrusters.

The Quantum Drive is an engine type based on the manipulation of the quantum medium, which allow ships to cross the vast distances of open space in a reasonable time.

Tank that stores Quantum fuel for the Quantum drives.

Thrusters are a key part of a spaceships - critical for getting you around, and also a key area to manage in both fuel consumption and emissions. Thrusters come in a huge range of sizes and types from the smallest fixed maneuvering thruster on a Nox, the huge pivoting VTOL thrusters found on the Idris, and all the way to the humongous fixed main thrusters found on the Bengal.[5]

The primary thrusters on the ship that are responsible for making it go forwards, these are the most important ones on traditionally constructed ships and provide the bulk of forward momentum.[5]

Having moved from the maneuvering section of the old matrix these are now counted in the Main Thruster category as they are a critical thruster set on the ship. There is little point having the biggest thruster around if you cant stop in time! Generally found in pairs some ships may have more or less depending on their roles and having a damage one can cause serious issues when trying to stop.[5]

These thrusters provide lift in the Z+ axis and can either be fixed in one position to provide continuous upward thrust or can pivot when needed to provide that thrust. Cargo or particularly ships tend to have fixed VTOL thrusters on the underside if they are required to enter/exit planets or moons with gravity to aid them in leaving the atmosphere and to also slow their decent. If a ship does not have any dedicated VTOL thrusters it is not the end of the world, it just requires more forethought under those circumstances mentioned before.[5]

Fixed Maneuvering thrusters provide instant thrust output as they do not need to align to the desired vector first, this gives a quicker response leading to more agility. The downside is you need to have more of them, a minimum of 12 on a ship to provide the ability to move in any direction with 6DOF.[5]

Gimbal Maneuvering thrusters provide thrust on one or more axis as they pivot or rotate to align themselves to the desired vector before providing thrust. This allows less thrusters to be needed but at the cost of a slower response rate and a small amount of power required to move them into position, making them vulnerable to power management problems.[5]

The power plant is the main source of energy for the ship. Its power depends on its size, its model and the type of technology used.

Coolers are a necessary piece of equipment used on all Ships in the Star Citizen Universe. Their purpose is to keep the Quantum Drives from overheating during intermediate and long distance use.

Purchasing more advanced Coolers (more advanced than the stock Coolers with which most ships are equipped) at Dumper's Depot, and equipping your ship with them is a solution to shorten or eliminate the cool down period after medium to long distance Quantum travels.

Batteries are a component that most ships will feature. Specifically, these function like real world batteries and can be charged up and used whilst the power plant is offline for both redundancy and lower signature performance.[6]

As an alternative to attaching the maximum sized weapon to your itemport, you may choose to use a Gimbal Mount. Gimbals allow players to attach a smaller sized weapon that will enable the user to line their shots up with more ease than a fixed on its own. The Gimbal Mount must be the same size as the hardpoint, but can only support a weapon at least one size smaller due to the space it occupies.[4]

Turrets can be found on ships of all sizes, from starters to capital ships, and the mounts they attach to can vary as dramatically in size as well. The largest found on some capital ships are as big as the smaller ships flying escort, wielding weapons capable of massive destruction.

Turrets are now divided into two distinct categories: Manned and Remote. Both of these turret types support player, NPC or AI control via various methods detailed further below:[7]

Missile racks are attached first to ordnance hardpoints, with the missiles or torpedoes attaching to them, not unlike a gimbal mount. These missile racks have sizes similar to weapons and there are multiple missile rack options per hardpoint size with adjustments to payload.[4]

As development continues, we intend to allow players to attach other items to these hardpoints, the first of which are Rocket Pods that fire unguided missiles, similar to the ones already found on the Mustang Delta. Rockets will be available with a variety of fuse types like timed, impact and proximity. Rockets should be perfect for ground attack missions where you want to saturate an area with explosives.[4]

Droppable explosives that safeguard an area of space, air, land, or sea.[4]

Smaller versions of what gives something like the Avenger Warlock its punch.[4]

Aside from Fuel Tanks and Utility Hardpoints, all of these items are swappable and to ensure balance, fall under one of 5 size categories:

Each itemport is restricted to a single type and size, meaning you cannot put a Power Plant on a hardpoint that a Cooler occupies, nor can you swap two Small Shield Generators out for a Medium Shield Generator. The jump in output between each item type varies but it can roughly be considered to be a 3:1 ratio, as in 3 Small items give roughly the same output as one Medium.[3]

Every swappable item in the game is assigned a grade for ease of comparison, this should be your first port of call when deciding what items to buy and swap out as it gives you a simple scale to compare against. Additional details about the individual nature of an item with be visible in the purchase screen of any vendor, but for a place to start, we provide a simple letter grade.

Different grades have different values to the items:

Most ships come standard with default C grade components. Some of the more exotic or specialized ships may come with Grade B equipment in default loadouts, which can often be seen reflected in their price. Of course, the reverse can also hold true where cheaper ships may come with D grade components by default. They'll still work fine and get you where you wanna go, but you'll want to consider upgrading them after a while.[3]

In a future 3.x patch, the plan is to assign every ship and every item a component class. This means players will only be able to put an item of that class into a ship that can utilize it.

At present, no ship is restricted to a single class of item, with each having at least two classes and virtually all of them featuring Civilian as an option. While this system is still in development, the idea at it's core is to prevent players from making certain ships too powerful within respective areas. We still want there to be an enormous amount of customization available, but this system we're still developing would do things like limit the chances of finding a Military Spec 85X or a Stealth Herald simply due to people buying the best items of that type.

CIG are still in the design phase of this system and therefore still working on all the edge cases. For 3.0 the default loadouts for the ships are the correct grades/classes that they are planned to be, so the performance of those ships should change and there will be many upgrade paths even with the class restriction. More information on the class restriction system will be provided when there is more concrete information to share.[3]

For a list of all ship components, see Category:Sub-components.

Sub-components live inside components and provide a boost to the base effectiveness in a variety of ways. Currently, they are consumable parts that will wear out much quicker than their host items themselves. Without sub-items the base item still functions as normal, but will find a small boost in performance when sub-items are installed. It's recommended that players carry spares for longer trips as the need to swap these out over extended duration trips is likely. Not carrying spares (or not having the ability to carry spares) isn't an impediment to base functionality, but should be seen as a continued maintenance loop necessary to provide an improved-upon and highly proficient system.

Each Sub Item fits in one of three categories, each boosting a different set of stats for that item:

Sub Items can fit in many different items and are not restricted to a specific type of item, such as a Power Plant Sub Item.

Computer Blades are not Sub Items. They are their own stand alone item that adds or expands functionality rather than improving a baseline stat. While currently they can only be added to Computer items, that may not be the only place for them in the future.[3]

Tinkering and tuning ships, parts, and components is particularly interesting to many people. Every component produced is "rated" to a certain specification by the manufacturer, even though it may possibly be capable of superior performance. Tuning, or "Overclocking", is the process of pushing a module or component beyond its rated specification. A laser cannon may be able to do 10% or 20% more damage if greater power is routed to it, but at the risk of greater heat generation or damage. Certain players or NPCs may make a living by overclocking components and selling them at a premium to others.[9]

Tuning can be conducted in various facilities. Basic overclocking can be done anywhere with the proper tools. Advanced tuning requires advanced facilities, such as the supercollider module on the Endeavor [10]

Component manufacturers design and manufacture nearly every ship component found on the market, competing with each other to release the next big part that brings them significant profit.[11]

This article is a stub.
This article needs some ❤️! You can help the Star Citizen Wiki by expanding it. See Category:Article stubs for other pages that needs exapnsion.
Retrieved from "https://starcitizen.tools/index.php?title=Ship_components&oldid=193718"
Category:
Hidden category:
🍪 We use cookies to keep session information and analytics to provide you a better experience.