Almost every pilot in the universe has a career they are currently working on; whether on a one-time contract or operating on a generational family business, everyone in a career focuses on one thing: making credits.

Careers may be personal, unique endeavours; like being paid by a player to train them in a particular ship's function, or official employment with a large corporation in a particular field. Overall, a player's career is up to them with only their reputation to certain people and companies acting a small hurdle to changing professions.

Note: There are far more ways to earn money than are listed here when including unofficial transactions between players. As such, these are the "official" careers that are supported by ship designs, Comm-links, and documentation.

Bounty Hunting is the dangerous task of tracking down criminals wanted by UEE law or private bounty, subduing them, and turning in the person or body for credits.[1] The Avenger Stalker is specifically designed for bounty hunters, including EMP weapons and six prisoner transport pods.

Exploration is the discovery and surveying of unknown locations and jump points. Equipped with powerful sensors and extended fuel tanks, explorers push the boundaries of known space for the opportunity to make the Next Big Discovery. Even explorers who don't make grand discoveries still earn significant money by selling the location of interesting anomalies to researchers, surveying ore-rich asteroids, or conducting stealthy military reconnaissance.[2]

The exploration of jump points will be an important part of expanding the universe, as they are the only method of travelling between systems. Although most of known space is connected by jump points, there are still many that have yet to explored.[3] Exploring a jump point is dangerous, requiring manual control and dexterity to navigate the dangerous and narrow warp-space corridor.[4]

Information specialists work on a unique type of cargo: knowledge and information. The handling of information is vital to every other trade in the galaxy, including the location of rich ore deposits to miners or the route of a cargo ship to a pirate. Information Specialists deal in this kind of information every day, trading and bartering for credits, other goods, or favours.[5]

The Herald is a prized ship for both the legal and illegal sides of information trade. It is capable of securely transferring critical data across the galaxy or it can be equipped to intercept, decrypt, and outright steal data packets to sell to the highest bidder. On the less dramatic side, news vans such as the Reliant Mako simply generate information using high-powered optics and sensors to be disseminated across the galaxy.[6]

The universe is a dangerous place, and characters who suffer injuries will always seek medical care. Pilots of ships with medical beds are uniquely suited to provide this care in space. The Endeavor also doubles as a "Spawn Point" for characters that die, allowing them to purchase a new ship from the hangar and jump back into the fight.[7]

Medical pilots can also take a "Search-and-rescue" role by navigating their ships into dangerous locations to seek out, retrieve, and stabilise wounded crew. Such medical ships may be found scouring battlefields after a capital ship fight to save ejected crew, or pulling scientists out of a destabilised space station before they die of radiation poisoning.[7]

Mercenaries are the hired guns of the universe; accepting military of private contracts for a variety of combat roles. These contracts may be from NPCs or other players and are one of the simplest roles: find the target, and destroy it.

Mining is the discovery, extraction, and refining of raw materials to be sold on the market, using ships to conduct most of these tasks. The RSI Orion is the largest example of a mining ship in Star Citizen and is the most capable of these tasks.

Mining will be one of the primary occupations of the game. Running a successful mining operation will require skill and creative thinking, not repetitive button pressing. Elements of this include paying attention to the commodity marketplace to determine what to mine, and then locating a suitable asteroid field that contains the mineral, and finally selling your cargo after you have mined it. All of the following specialist positions may be helmed by either a player or an NPC, with more experienced NPCs performing their duties in superior fashion, but usually at the expense of demanding a higher monthly salary.[8] 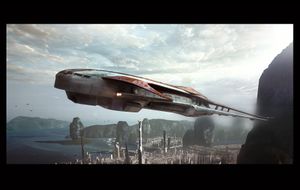 Passenger transport is a unique occupational role that characters can assume. The objective of a transporter is to deliver passenger from one location to another in as comfortable a manner as possible. First, a ship such as the Genesis Starliner must be available for use before a license is acquired. Then, the ship is docked at a public landing pad and the local Flight Schedule Computer begins broadcasting the available seats to the public. Once the ship is loaded with passengers and supplies, it departs.

During transport, the character must manage hired crew, unruly customers, and generally balance all customer needs. Computer terminals, drink mixers, medical devices, and entertainment terminals may all be employed to keep happiness and satisfaction at its highest level. Upon landing, passengers will affect your reputation by providing feedback and departing the ship. Once cleared, the ship is ready to take on new supplies and set out on a new route.[9]

Piracy is the unlawful theft of cargo, goods, and ships by attacking other characters in the universe. Ships like the Cutlass are well-suited to the role with strong weapons and an ample cargo bay to make off with their valuable catch. 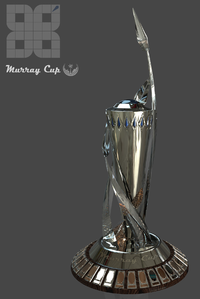 The Murray Cup: a racer's dream

Racing is the speed demon's career, filled with thrumming engines, chanting fans, and split-second decisions. Racers tune their beloved M50 Interceptor or 350r to racing specifications for months before each race, trying to get that slight edge on their opponents. The grand dream of any racer is the Murray Cup, the jewel in star racing's triple crown [10]

Concept render of the repair of a Gladius' damaged wing

When a ship or component is damaged, it must be repaired. These repairs can be done simply and cheaply in NPC stations or planetside, but for local, fast repairs, only a trained repairman (Hopefully with a Crucible repair ship)will do.

Repair is a relatively simple profession: get paid to repair damaged ships; however, the difference between good repair job and a bad one could result in the destruction of a ship from a failed component. Repair crew must use the correct materials, apply them efficiently and accurately, and maintain component operation.[11]

Salvage is the collection and processing of ships, stations and other manufactured goods after they have been destroyed. Ships like the Reclaimer and the Vulture specialise in such a role; equipped with unmanned drones, tractor beams, and reclamation equipment to turn burnt-out husks into valuable materials.

The first iteration of gameplay will be implemented with Patch 3.18 including 'hull scraping' to sell material for profit and multitool repair. It can be obtained via salvage lasers on the Reclaimer and Vulture by activating the salvage mode or in FPS via the multitool. The Reclaimer can be manned with a second salvage turret, but also produces boxes of recycled material composite which must be stacked manually in the storage grid of the ship. The FPS Multitool can salvage small chunks and patch hull fissures.[12]

Science is the gathering of information and the analysis of this information into useful, valuable data. The Endeavor in its Discovery-class configuration is a dedicated science ship, with general research and science bays in combination with the optional telescope array to produce this data for buyers.

To avoid police scans, ships will have to install special smugglers' compartments on their ships that protect items from such scans.[13] 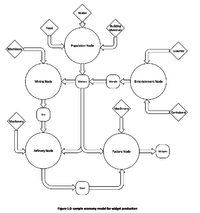 Trading in Star Citizen is the distribution of goods from producers to consumers using ships. This distribution comes in several forms, with varying levels of pay, danger, and consistency:

Ships that are most suited to trading include ones with high cargo capacity and/or range. Generally, traders must make a trade-off between cargo capacity, range, and defences; while the Hull C ship may carry a relatively large amount of cargo, it's nearly defenceless without an escort.[14]

Retrieved from "https://starcitizen.tools/index.php?title=Careers&oldid=198320#Exploration"
🍪 We use cookies to keep session information to provide you a better experience.