The Consolidated Outland Pioneer is an upcoming self-contained mobile construction yard capable of creating planetary modular structures, allowing colonists to customize their new homes on the frontier.[1] Utilizing an on-board reserve of resources, the Pioneer can construct and deploy modular outposts as well as continue to build additional modules to turn your outpost into a settlement.[2][3] 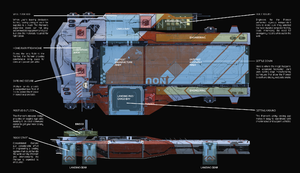 The interior map of Pioneer

The Pioneer houses a fully-functioning production line within its hull capable of constructing a custom outpost.[3]

The Pioneer has an advanced fabrication plant that allows assembling a ready-to-deploy remote outpost from the construction materials stored aboard. It can create modules with a variety of functions utilizing Pioneer-compatible design schematics.[4]

The Pioneer’s elevated bridge provides an eagle’s eye view of the settlement when deployed on ground, doubling as the command center of the colony.[4] While in flight, it provides maximum visibility while piloting and can serve as a surveying point while planetside.[3]

The Pioneer has an external utility landing pad that supports utility vehicles such as Argo MPUV or additional fighter escorts.[3]

The Pioneer features two manned and two remote turrets to provide protection while in flight or as additional ground-based defensive systems against hostiles on the ground or air for the settlement while landed.[3]

The Pioneer features Consolidated Outland’s Vari-Pad technology that was specifically designed to safely stabilize the ship on a wide variety of planetary terrain and environments.[3]

The Pioneer has a dedicated cargo area to bring supplies, planetary defenses and construction materials required for fabrication.[4]

The Pioneer contains a habitation area that provides comfortable lodging for the ship’s crew and additional passengers during the long flight to the frontier.[3]

Development of a new ship

After the success of Consolidated Outland's first ship, Mustang in 2944, Silas Koerner wanted to disrupt Humanity by leading the company to strike out in a bold new direction and began developing an expedition vessel that is significantly different from its predecessor. Instead of simply constructing a ship to fly to new worlds, Silas and his team dreamt of a craft that would help build them. Using the advanced ship manufacturing plants they had constructed on Bremen as their inspiration, the Consolidated Outland design team managed to house an entire automated fabrication plant inside the hull of the Pioneer.[4]

In 2947, the company unveiled the Pioneer. For the first time ever, colonists can custom manufacture outposts onsite to their own exacting specifications, stock their new home with supplies, and defend it with just one single vessel. Colonization used to take a corporation could now be done by a few individuals.[4] The initial batch of Pioneers also include a single Claim License from UEE Planetary Development Bureau for commercial or private construction that allows the owner to officially own a piece of the UEE and enjoy its protection.[3]

The Pioneer originated from the idea of Stake your Claim, based on the

land settlement that happened in the States & Canada in 1889. Ships at that time are built to go and settle unknown lands. Since procedural planets create a huge play area that needs to be filled, it was a good idea to let citizens fill it. On top of that, CIG needed to establish two ends of a spectrum for habitation, from cities (like Area 18) to villages to outposts.[5]