(Redirected from University of Jalan)
Editorial Note
This page attempts to represent published information about Universities in the UEE, but other institutions are implied to exist outside of those listed here.

A university is an institution of higher education and centre of research within the United Empire of Earth (UEE). While many are centred on the education-dominated Rhetor system, several other developed systems also have universities, and some planets have numerous Universities.

Universities of the Rhetor system

Reisse, in the Rhetor system.

Rhetor was discovered in 2287, making it the second extrasolar system to be visited after Croshaw, and the first system known two jumps away from the Sol system. The Croshaw - Rhetor Jump Point was discovered by students from Martian Institute of Space and Technology. The school's then-president Adrianne Zemlock , a critic of the way that Croshaw had been colonised by corporate interests, ransomed the Jump Point location to the government in return for a quarter of the habitable or terraformed land being set aside for educational purposes.[1]

Today the system is synonymous with higher education, and is home to a number of prestigious institutions, including:

Universities of the Sol system 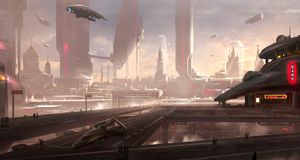 Moscow, on Earth. Home to the University of Moscow.

As the home system of mankind, Sol is home to numerous ancient and prestigious institutions of higher education on both Earth and Mars.

This institutions in the Sol system include: 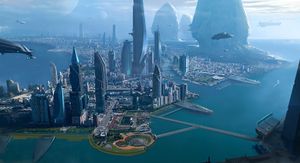 Terra is home to Song University and Terra University, as well as the Prime Linguistics Institute and the Quasi Institute for Xenological Studies.

As the jewel of the Eastern Empire, Terra is home to numerous large cities and thus several Universities, including: 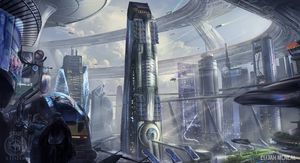 The iconic domed city of Jata is home to at least two Universities.

Jata, the iconic city of Cestulus (Davien II), is home to at least two Universities.

Astravin University at Cestulus (AUC) is a public research university in Jata on Cestulus (Davien II) and the flagship campus of the Astravin University system. Founded in 2520, AUC survived Cestulus' difficult colonial period and expanded during the planet's economic reversal in the 27th century. It is the largest university in the Davien system and features an oshi fish as its mascot.[15]

The University of Jata is located in the city of Jata on Cestulus (Davien II). Simone Maruyama is a Professor of History at the University of Jata, and a member of the Jata Historical Society’s Board of Directors, who proposed naming a city park after controversial former Aegis Dynamics CEO Hana Chan.[16]

Fujin City on Saisei is home to Fujin Technical College. The University of Saisei is also located on the planet.

Fujin City School for the Arts

The Fujin City School for the Arts is best known for the group of seven students who founded CC's Conversions, an armor customization business.[17]

Fujin Technical College (FTC) is an institute of higher education located in Fujin City on Saisei (Centauri III). FTC offers a variety of training courses, and is most notable for its Certification in Arts and Design. The school itself was designed to blend seamlessly with Fujin City’s natural environment.[18]

The University of Saisei is located on Saisei (Centauri III). It restored a former terraforming station on Yar (Centauri II) as a research outpost in 2501. The parents of Kayva Crosby were employed to run the facility's landing pad. Kayva was born shortly after their arrival in 2503. In 2518, biotech expert Meredith Douze joined the outpost with her son, Aaron Douze. After returning to Saisei at the age of 17, Aaron studied business at the University, followed by Kayva who studied engineering: the two later marry, and founded Tumbril Land Systems.[19]

Serling (Horus I) is home to the University of Aten.

Aydo Polytechnic, located on Green, is a Polytechnic University that offers degrees in engineering, applied sciences and Fine Arts[20]. One of its alumni was Marana River, founder of the Imperial Arts Foundation.[20]

The University of Aten, located on Serling (Horus I), is conducting a lengthy study in an attempt to isolate the differences between people who flourish in the unusual daylight conditions of the tidally-locked worlds (often those in families who have lived on the planet for generations) versus those who have trouble adjusting.[21]

The University of Angeli is located on Angeli (Croshaw II). August Dunlow, founder of Crusader Industries, studied a double-major in business and political science. While at the University he became a staunch Anti-Messer activist.[22]

The University of Jalan is located on the Tevarin homeworld of Jalan (Elysium IV). Nutrition researchers at Jalan developed the Hydration Efficacy Index.[23] Jovi Ingstrom, co-founder of Esperia, studied xenoarcheology at Jalan until being expelled in his sophomore year.[6]

The University of Tram, located in Tram on Asura (Ferron III), was attended by Basilisk founder Simone Visconti, where she studied engineering. The programme was considered notably less prestigious than that of the institution she left, at UPARQ.[24]

Retrieved from "https://starcitizen.tools/index.php?title=Universities_of_the_UEE&oldid=187403#University_of_Jalan"
Category:
🍪 We use cookies to keep session information and analytics to provide you a better experience.