Hurston (Stanton I) is a terrestrial Super-Earth and Earth analog in the Stanton System. According to Chris Roberts, it has a diameter of 2000 Km in-game, which equates to 12 000 Km in the Lore.[1] Hurston is home to its namesake, Hurston Dynamics, an aristocratic family-run weapons manufacturer that has bled the planet dry.

Stanton I and its satellites were accessed in 2904 by CEO Magda Hurston. The planet's ecosphere has been largely destroyed in just 50 years. Almost all indigenous life has been killed by the mining and manufacturing processes performed here.

The company builds several lines of reliable weapons, so pilots looking for specialized guns might do well to visit here. The planet also produces a variety of munitions which are sold to other companies, and transport assistance is always well compensated. Workers are imported for year-long factory or mining contracts; few choose to re-up. Hurston is always in need of cheap labor and is a good source for traders looking to move antimatter precursors.[2]

Like all corporation-owned planets in the Stanton system, Hurston has its own jurisdiction and security in the form of Hurston Security.

Hurston's diameter is similar to Earth (12 756 Km). The Starmap classifies Hurston as a Super-Earth. Therefore it must have a mass much greater than Earth. It is very likely that the planet's mantle or core contains a higher amount of metals (especially iron) or other heavier elements. The planet has a rocky surface with landmasses and oceans.

Hurston's atmospheric composition is practically identical to Earth's. It is composed primarily of nitrogen and oxygen, and contains trace amounts of argon and carbon dioxide. While it is a breathable atmosphere for human beings, unregulated industrial activity has left many toxic compounds behind, causing permanently hazy daytime conditions and a dense presence of visible particulates in the air. Please consult Lorville's public Air Quality Index services for updates on the current atmospheric quality. Gyson Ready-Up softshell helmets can be purchased at Tammany & Sons, located near Leavsden Square in the Workers District, should you wish to protect yourself from the pollution. 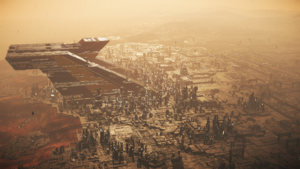 One of the many company towns Hurston has established for its employees, Lorville is the only import landing zone on the planet. While the city overlooks some of the larger strip-mining operations that are currently underway, it exists in the shadow of Central, the corporate headquarters for Hurston Dynamics.[3] 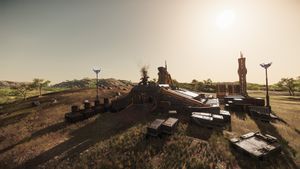 HDSF-Elbridge is one of many outposts on Hurston's surface.

The majority of Hurston's surface is Wasteland, the result of a planet abused by industry. This was once rich Savannah land but most of the native ecosystem has died off, leaving just a few bleak remnants of cacti and the hardiest of grasses, peppered with rocks and industrial debris.[4] 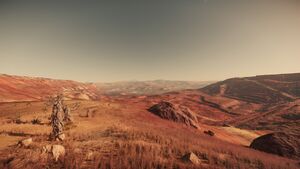 The Underground Facility from the CitizenCon 2948 Demo was located in the Strip Mine biome. This is the first biome to feature roads.[1]

Small settlements have been shown in Around the Verse located in the Trash Mesa biome. This environment contains debris varying in size from ship fuselages to bolts.[citation needed ] Caution: This biome is very difficult to navigate in a ground vehicle.

The crashed Satellite from the CitizenCon 2018 Demo was located in the Savannah biome.[1] This biome represents the parts of the world where life has clung on despite the industry and pollution. Before Hurston Dynamics set up operations on the planet, this was the predominant biome.[4] As of 3.7, this is the only place where Pitambu and Golden Medmon Harvestables can be found.[5]

Hurston shares this biome with its moon Arial. It occupies around 5% of the planet. This biome has emerged as the result of industry on a planet rich in somewhat volatile materials. The artists describe it as "the planet fighting back". [4] Prota can be found here.[5]

Lorville is located near the shores of a Polluted Coast biome.[1] 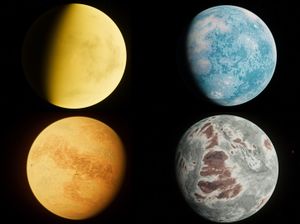 This moon was named after the 3rd CEO of Hurston Dynamics, Arial Hurston, who was known for creating the controversial Life/Labor-style employee contract.

This moon was named after scientist Aberdeen Hurston who was credited with designing the company's first antimatter warhead.

This moon was named after Hurston Dynamics CEO Magda Stanton who made the decision to purchase Stanton I from the UEE. Magda is the mother of current CEO "Colonel" Gavin E. Hurston.

This moon was named after Ita Hurston, who died during the First Tevarin War, as a reminder of why "the products Hurston Dynamics makes are so important."