Lorville is one of the many company towns Hurston Dynamics has established for its employees on the company-owned planet Hurston. Lorville is the only important landing zone on the planet. While the city overlooks some of the larger strip-mining operations that are currently underway, it exists in the shadow of Central Tower, the corporate headquarters for Hurston Dynamics.[1]

Lorville is surrounded by a wall that dwarfs even decently sized ships.[1] The City is located in the Desert, and is close to the Polluted Coast biome.

Map of the Lorville Transit System

The Lorville Mass Transit System has four main lines - Perimeter Line (3.3), Spaceport Line (3.3), Central Line (3.4) and Industry Line (3.4). There is a general no-fly zone over the city, with landing clearance granted at Teasa Spaceport and the landing pads on top of Central. Garages can be found at the six perimeter gates.

This district is dominated by the gigantic Hurston Dynamics headquarters building Central Tower. As of Alpha 3.4, the player can access a small area inside one of the tower's 'feet', containing Central Station, Archibald Hurston Memorial Hall, HD Showcase and Transfers where Constantine Hurston can be found. 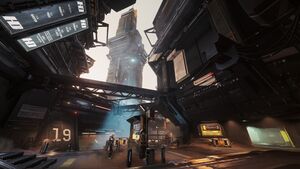 The Workers District has Leavsden Square at its hub, with residential building L19 Residences (El One Nine) nearby containing 60 Player Habs and an administrator. Metro Center Station is in walking distance of L19. The FO19 Production Quad is located in the Workers District. Other points of interest are MacIntyre & Victor's Bar, armor and clothing shop Tammany and Sons, Reclamation & Disposal, Maria Pure of Heart hospital, the Administration Office, Security Building and Leavsden Station. The Workers District may be renamed to L19 Workers District in the future to differenciate it.

As the main access to Lorville, you must pass through Customs here. So far we are only aware of Terminal 5, featuring the New Deal ship showroom, Archimedes Flight, Vantage Rentals and the obligatory Lost & Found. The Desmond Memorial Convention Center hosted IAE West 2948. The waiting area features ASOP terminals as well as lounges including the Chairman's Club Lounge. Terminal 5 has 8 hangars. Both Domestic and Interplanetary Commercial Flights will be available from Teasa via seperate gates.

As another potential access to Lorville, you must pass through Customs here. All gates have ASOP terminals and Garages for spawning ground vehicles. From outside the gates are well signposted from the no-fly-zone perimeter, and the gates themselves have blue flashing beacons atop towers. Outside the perimeter you can find Shanty Towns.

The Strip Mine is connected to the Workers District by the worker train line that runs past M&V Bar.